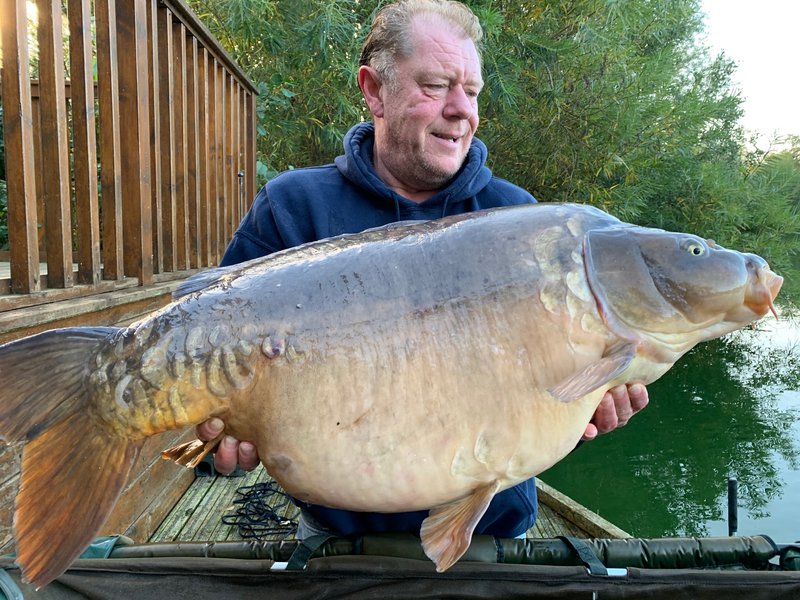 It is already time to 'present' my annual report and reflections on the year.

This year has been both a long and short one! At one level I can't believe another year has already gone. It has times felt to be a long one due to Coronavirus and the two national lockdowns which we have had to 'endure'. Still I do absolutely recognise that Cherry Lakes is almost the perfect place to be if you have to stay at home.......so I am not complaining!

We entered this year in good shape and confidently expected 2020 to be a record year for us both in terms of the fishing as well as guest numbers. The lockdowns, particularly the April to June one, left a big dent in the year and prevents a true comparison with previous years. In between the lockdowns, we were exceptionally busy as fishing increased in popularity and the relative isolation of the Lodges/Cottage made us an ideal location for the staycation boom. Indeed had we not needed to shut down during November we would have been full!

Enough about Coronavirus. Like everyone else I am sick of talking/hearing about it and can't wait to get our vaccinations at the earliest opportunity.

As before in these reports, I am going to (over) indulge myself and include lots of photos here. Some real cracking Carp, all of which I would love to catch. I hope you enjoy this selection.

One of the 'benefits' of the Spring/Summer breakdown was that I got the chance to fish Cherry Lake. As a result I joined the select group of anglers catching a 30, 35 and 40lb+ Carp from the lake. I can now wear all the clothing because I earnt the right to do so, rather just because I am the owner! So at the risk of over-exposing my 'Covid- haircut', I thought I would re-run one of my photos......with 'Pac-man' at 33lb. Now those lovely warm days do seem a long time ago!

I was expecting Cherry Lake to produce over 50 different 30lb+ Carp in 2020. The loss of over 3 months of fishing time though put paid to this. We currently stand at 46 for different Cherry Lake Carp above this target weight. The Carp have continued to put on weight. We have maintained our on-going practise of feeding the fish with a combination of Pellets, boilies and spod mix which coupled with anglers bait, has helped ensure the Carp being healthy in good condition and growing. Of the 46 different 30+ Carp, we recorded 3 different forties plus a further 9 over 35lb. An alternative breakdown shows we had 5 Ghost carp over 30lb (4 Mirrors to 38-04 and 1 Common), 13 Commons and 28 Mirrors.

The final analysis of the 46 different 30lb+ Carp, confirmed that 11 of those catalogued in 2020 did not appear in the 2019 records (when 44 were recorded). Of this 11, 10 were new thirties for us. By my reckoning we have a further 10+ Carp over 30lb which were either not caught in 2020 or were caught and not reported/photographed properly. The target for 2021 is 50+which hopefully with no further shutdowns we should reach comfortably.

Charlie England caught 'Dick' in October at a new record weight of 49-12. She was absolutely huge and looked great, as you can see from the lead photo above) and was some 5lb up in weight on the same period last year. It is a shame that most of the other bigger Carp were not caught during the autumn when their weights would have been higher than in the summer. Hopefully some of them will put in appearance this winter/spring and we will be better able to gauge their true weight gain.

Tom Nixon-Taylor landed the biggest Common of the year when he had 'The Patch' at 42-12 in July. The long Mirror 'Ruby was the most frequently photographed of our 40's, which came out 4 times during the year being 42lb when last caught in the early autumn. 'Ruby' was first caught this year by Jack Lyon in January at 41lb. We allowed him to name him after his daughter Ruby who is also photographed above!

We had some amazing catches reported in 2020. I am pleased that the biggest Carp pictured above all came to returning guests, but it does not always work like that! Alex Crouch visited for the first time and landed 4 different 30's including this 36-08 Mirror above. I did joke about charging him double!

I was also expecting to reach the 200 membership mark for the Cherry Lake 30+ club. The Lockdowns also undermining the achievement of this target. As I write we stand at 193 different members. An increase of 33 on 2019. This increase does not accurately reflect the number of 30's being caught as many of them are landed by returning guests who are already members. Whilst we do 'present' the missing items of clothing (eg Hoody), as guests catch bigger Carp, anglers can only 'join the club' once! Another milestone presumably for 2020?

We got to know Charlie England this year when he spent much of February fishing Cherry Lake. Charlie (who returned to set the new Cherry Lake record in October) really showed what a good winter campaign can produce. During the month of February, whilst fishing from Osprey Lodge, he landed 22 Carp including 6 thirties to 38-04. Whilst he regularly incurred blanks lasting 2-3 days, he also enjoyed days with multiple captures. From memory he enjoyed two braces of 30+ Carp. Proving again how important it is for winter fishing to have your baits in the water when they want to feed. Unsurprisingly Charlie is planning another winter campaign in February!

We have continued to invest and re-invest across Cherry Lakes. As well as keeping the Lodges up to our normal high standards (Fridge/Freezers, Hobs, Cookers, Sofa beds and mattresses have all been replaced) we have also completely treated the outside of the Lodges and decking areas A big time-consuming job which needs reasonable temperature's and dry conditions (one benefit of the Spring lockdown).

We have continued with our on-going tree and scrub planting to make Cherry Lakes as attractive as we can, as well as our annual tree work to ensure the crack Willows and Alders are well maintained. We have also spent a lot of effort tidying up and better framing the fishery's road. By far the biggest investment of the year has been in the installation of three new aeration systems on Cherry Springs, Cherry Mere and Cherry Pool. I am looking forwards to seeing how much these new systems improve the water quality for the fish and how they respond.

I thought I would finish this Cherry Lake report by re-running this amazing shot of the Cherry Lake Carp in pre-spawning mood from last June.

We would also like to thank everyone who has visited Cherry Lake this year. We hope you enjoyed your time here as much as we did in welcoming our guests and friends.

Let's hope we can have 12 months of fishing next year.