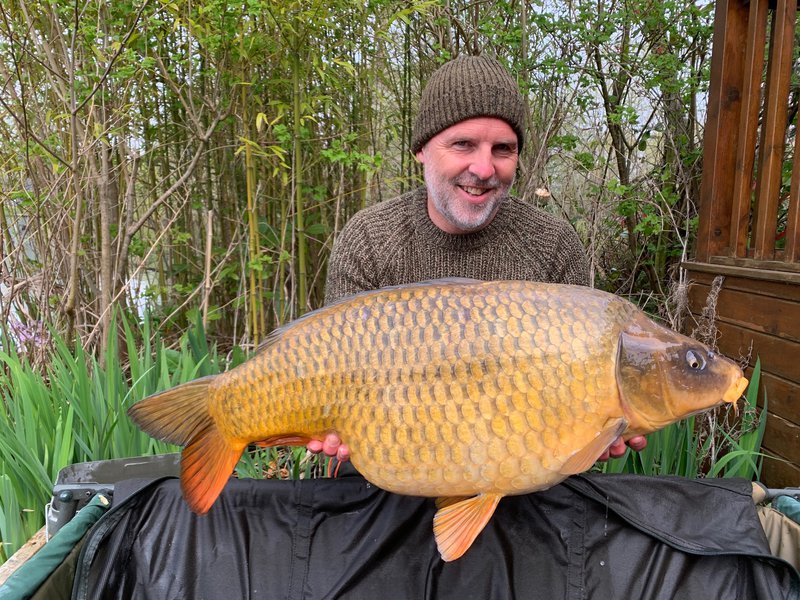 The big Commons feed on the Full Moon

It is difficult to know where to start. I am also worried that regular readers are getting fed up hearing about thirty pounders. My trouble is that English 30's still 'turn my head'. I guess I am a product of being a Carp angler of the 1970's when catching twenties was memorable and 30's the fish of dreams!

We have had some lovely Carp caught around the complex and in particular from Cherry Lake.

I will start with Gary Owen and his dad, Rob. In my last update I reported on Gary's capture of a 37-08 Ghost Mirror and the fact that it was his second 35lb+ ghost carp over 35lb from Cherry Lake. Amazingly on Friday morning, just before they were due to leave another big Ghost Carp picked up his snowman bait. This one weighed in at 35-10. Meaning that Gary, who has clearly got a 'special something' and proves to be irresistible to the Ghosties, has had three different Ghost Carp over 35lb from Cherry Lake. On a different occasion I would have published all of these together, but there is too much to update you on. Maybe I will when we have a quiet spell?

Gary's dad Rob Owen, also had a 31-00 Common Carp around 21.00 on Thursday evening. A new PB for Rob. As you can imagine they all went home very happy!

Simon and Darren Littmoden spent last week in Osprey Lodge and did very well. It is always a pleasure to have the Littmoden's stay at Cherry Lake. As well as being real gentlemen, they are extremely competent anglers and very knowledgeable about lake management. It helps that Simon has had his own French lake for over 10 years. I just hope I did not ask too many questions (well I am almost a journalist!) and scare them off!.

I think they shared around a dozen Carp between them including three thirties. In order to ensure they share the chanced of catching evenly between them they take turns on the rods. This normally works well. However on this occasion Simon got the 'rub of the green' in that he had the three 30's whilst Darren had to make do with 'just' a 29lber plus a 17lb Pike! Hopefully it is your turn next time Darren!

Simon and Darren both fished small boilies and pop-ups over pellets. Simon is now the 196th member of the Cherry Lakes 30+ club. His biggest Carp was a stocky 34-08 Mirror (caught last year by Roger Sparks at 33-04). He also caught a 33-12 Ghost Common (see lead picture above) and a 30-08 Mirror. I have to say that the night photo of the 30-08 is one of the best night shots I have ever seen. It was obviously a week when the Ghost Carp as well as the Commons went on the feed!

His results were however eclipsed by Gavin Harper in the Cottage swim who smashed his PB twice. Gavin struggled until Sunday when he had his first run. After a good fight I was very pleased to be able to slip the landing net under what looked like to be a very nice Common. Indeed it was and went 32-10 on the scales. A single bait out in open water did the trick. His only disappointment was that his family had just gone out and was not there to see his new PB. You can.....it is pictured above.

His second PB of the weekend, was landed early on Monday morning. I was delighted to get an early call around 06.00 and to be asked to help weigh and photo a biggie. At 35-12 this Common was 'all there' and looked the business. I think the daffodils in the background make it even more special!

Over the last week, around 66% of the Carp caught have been Common's. A high percentage given the stock is around 60% Mirrors. I have heard it said that Commons often feed on the Full Moon. I am not sure how true this is, but coincidence or not, this has been the case this week.

Ian Collins along with his son Joshua and friend Joel, stayed in Pochard Lodge and also thoroughly enjoyed themselves. For some reason Cherry Mere was more productive during the night (Full Moon?) rather than the day. They all caught, including Joshua who landed his new PB, aa 21-08 Mirror at the same time as Joel was playing a 19lb Mirror. They were both pleased as you can see in the photo below.

Very well done to all the anglers mentioned above.