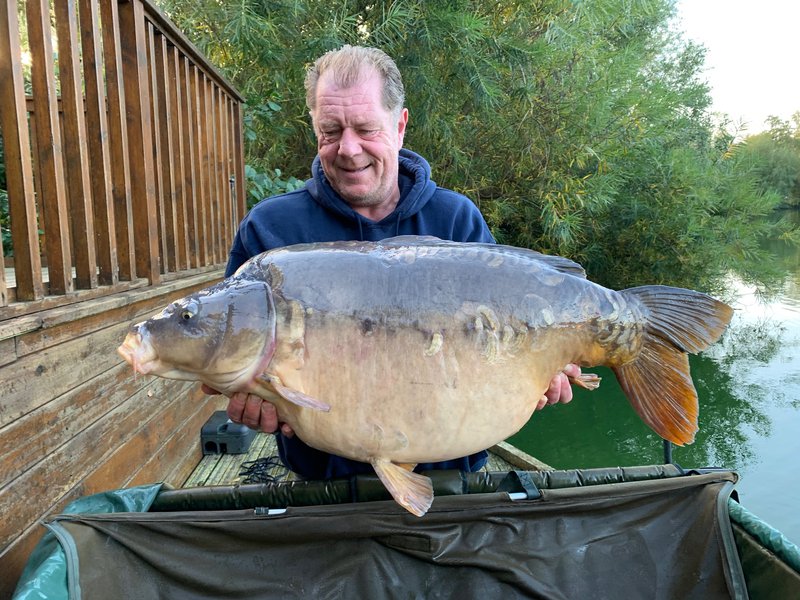 Charlie England returned to Cherry Lake on Monday to spend a week in Osprey Lodge. His first visit since his great results last February.

On arrival I said to Charlie that the lake has been hard work throughout October. He was very relaxed about this and decided to take the same approach to the lake as he did in February and start with his favoured spots from earlier this year. Essentially his tactics is to fish small baits over a combination of hempseed, pellets and sweetcorn.

The first 36 hours was slow (as in no bleeps etc), but just after 08.00 this morning it all changed. Fortunately Charlie was outside on the decking studying the water when he had three 'bleeps' on his middle rod. He instantly moved to his rods and when the line slightly tightened again (only enough for a couple more bleeps), he struck and hit a 'brick wall'. After a really hard fight, Charlie netted the big Carp at the first time of asking. It was then he started shaking as he realised how big it was!

He phoned me shortly after, and asked me to bring the fishery scales as he had got a Carp of around 50lbs! As you can imagine I turned up very quickly!

On inspecting the Carp, I first mistook it for a Dolphin! You can see why I thought this by seeing the size of its back in the photo below. I then re-focussed and realised he had the big Mirror known as 'Dick'.

In the presence of both Judith and Andy Watts (the previous lake record holder), we weighed this impressive beast at 49-12. This smashed the previous record set by the same Carp in June at 44-12 by exactly 5lbs. As you can see from the photos above, she looked like she is still carrying spawn as well as being big across the shoulders. I very much hope that she can either be successfully reabsorb or discharge this spawn next year.

Fishery manager Dave has been on holiday this week so I text him saying we had some good lake news. Very quickly Dave phoned me. All he could say for a couple of minutes was '49-12............49-12........'. I think he was as stunned as me by the weight gain. He will be both delighted for Charlie as well as being 'gutted' not to have been here!

Charlie was on such a high that he even made Andy and I a cup of Coffee and shared his 'Ginger Nut' biscuits with us! When I gave him his 40+ fleece he has just about stopped shaking with excitement.

Charlie is the 4th angler in a small exclusive group who have the complete set of the Cherry Lakes 30+ polo shirt, 35+ hoody and 40+ Fleece. Well done Charlie, great angling.

The only other angler to have caught this week from Cherry Lake is James Morris in Grebe Lodge. He caught this impressive 29-02 Common pictured below, at 02.00 during Monday night. This fish picked up a small pop-up positioned close to the tree lined margins. By sheer coincidence this Common is in this years catalogue of thirties having been caught by Charlie England in February at 30-12.

Although most of our Carp are up in weights...........this just goes to show that weights (like Investments) can go up and down!

Regardless still a very nice Common which is in great condition as you can see below. Well done James and hopefully there is one or two more to come.