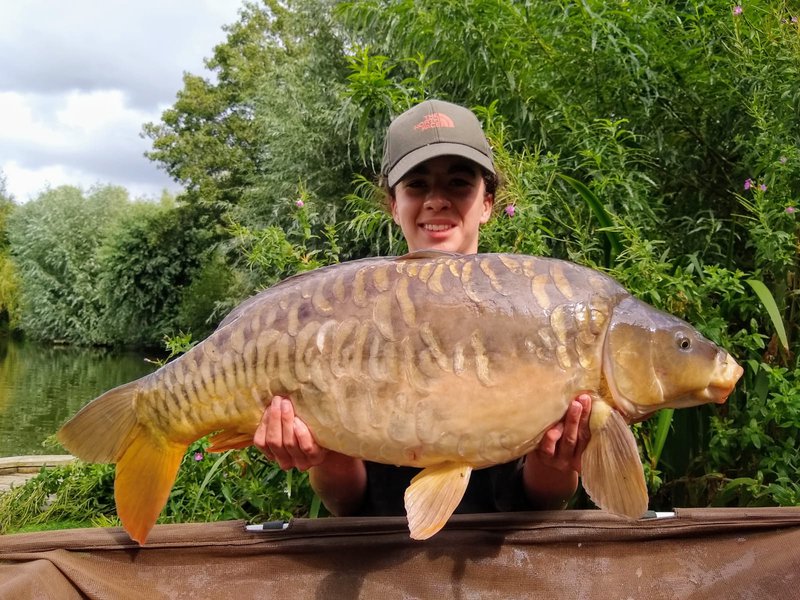 They catch an amazing 78 Carp in a week

The Alam fishing family have just finished an amazing week on Cherry Springs. Between them, Dad Jav and the twins Leon and Hannah (both 12), landed an amazing 78 Carp during their week long holiday in Kingfisher Lodge. We always enjoy welcoming fishing families and in particular meeting young anglers, who after all are angling's future.

Cherry Springs is our most moody lake. I think this is probably because it is our most silty lake and the Carp can more easily get 'on the naturals'. Strange though given the stocking level of 400+ good sized Carp. Normally this level of stocking should ensure at least a few takes a day, This summer it has most definitely had it's 'off' days and weeks, when it is surprisingly slow, as well as 'on' weeks. Well this week it was most certainly 'on'!

Led by Jav, the Alam family team fished extremely sensibly all week. Using a combination of pellets and hempseed with some crushed krill boilies, they kept feeding the same areas all week. The Carp, which were obviously on the munch this week, simply kept returning to their well fed spots. Rigs were kept simple with small snowman presentations being the most productive. Extremely effective tactics given the conditions of this week.

Their catch of 78 Carp sets a new record. The previous record holder was Richard Mascall who from memory caught 76 in a week. However to be fair to Richard he was the only angler where this week there were three!

Thanks to Hannah diligently writing down the weights of each fish as they caught them, I can report a more detailed breakdown than normal. Their catch comprised of 78 Carp of which 36 were Commons and 42 Mirrors. Of these 7 were twenties and 67 were doubles with just 4 singles. The ratio of twenties caught was by chance in line with our target ratio of 1:10 Carp caught being a 20lb+.

Other than maybe Dad Jav, Hannah seemed to be the keenest angler in the family. I was particularly impressed with her on arrival, as her eyes were constantly on the lake and pointed out several Carp shows in the short period when we were welcoming them to the Lodge. Hannah stayed enthusiastic all week, even in the rain, and she had a couple of good looking twenties. This included the 22-12 Mirror in the lead photo above, as well as a new PB, a 24-06 Mirror, also above. On the last morning she also landed the 'acclaimed prettiest Carp' of the week, a 18-04 Mirror below

Up until Thursday, Leon who had been keeping up with Java and Hannah, in terms of Carp caught, had not managed to land a bigger one, with his best being a 17-03 Mirror. To his credit Leon did not moan (well at least not while I was there) and kept smiling. He had a big smile on his face on Thursday afternoon in the heavy rain. He had just caught a good looking Mirror of 24-04!

The biggest Carp of the week was landed by Jav. As you can see from the photo above, this was a cracking Linear Mirror of 26-12. Normally this photo would have featured earlier in this update...........but I thought it would be good to give 'the kids' the headlines!

Well done to all the Alam's on such a fantastic result. It was a pleasure meeting you all this week.

As a footnote to the above story...........Jav contacted me to say that Mum Sophie felt a bit left out as she caught the 50th Carp of the trip, A Mirror of 15lb. So to keepo the peace I have included Sophie's trophy shot below. Well done Sophie too!