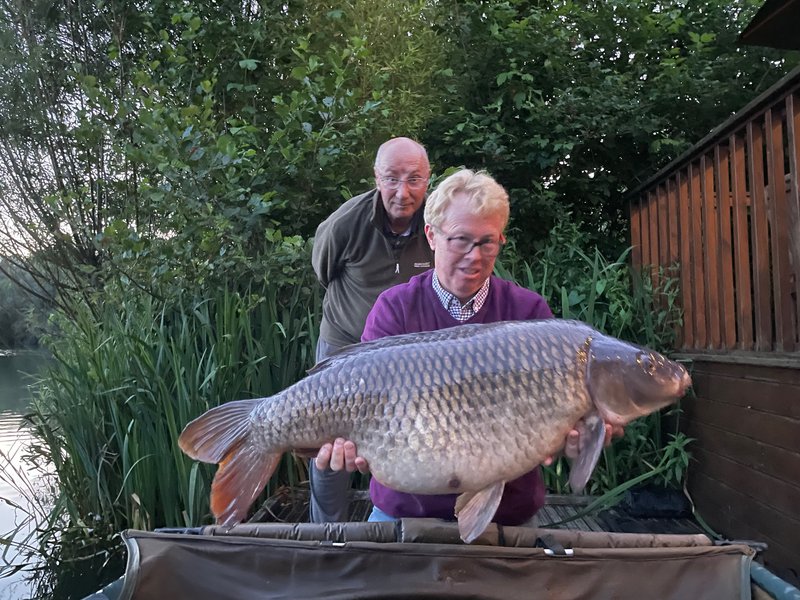 I will admit to becoming increasingly distracted and I am not as focussed as normal on Cherry Lakes and the fishing.

Why? Well my only daughter Victoria is getting married at Cherry Lakes on 24 July and there is so much to do. My wife says I am doing a very good impression of Corporal Jones from Dad's Army.................running around shouting 'don't panic', don't panic'!

England's run in the Euro's is also not helping my fishing focus!

Until just a few weeks ago we were not even sure if the wedding could go ahead because of Covid restrictions. Fortunately, her date is just outside of the planned relaxation of all restrictions which is due to takes place on 19 July. Our principal worry is now what to do with 200 guests if it rains. The more normal outdoor summer event worry! There are also a million things to do to ensure the place looks good for 'my princess'.

We will be closing for a short while from 19 July to ensure we can focus on the big day. I say the 'big day' loosely, because we seem to be having a an 'American/Indian' style wedding over 4 days starting with a rehearsal dinner on Thursday and finishing with a lake party on the Sunday afternoon/evening. It certainly was not like this when Judith and I tied the knot! The marquee etc along with a number of other items will disappear during the few days after the wedding and by August we will be open as normal.

I certainly won't be getting a rest during this short shutdown, but the Carp will. I hope they appreciate it!

The above is a long winded excuse for a short update this time. In truth the fishing has been slow across the complex. The Carp on all the lakes seem to have been as moody as the recent weather.

The Cherry Lake Carp still have not all spawned. As a result the Carp that have been caught are largely male fish, for example Bob Smith and his Grandson Jason fished hard in Grebe Lodge for just 4 Carp with the biggest just 24lb. The 'big girls' continue to hide away.

That was until Saturday evening. I was 'enjoying' the England vs Ukraine game at the local pub when Judith called to say Alan Powell in Osprey Lodge had a Carp around 40lb during the half-term break. Talk about being conflicted. Should I leave (and I was walking for obvious reasons), or should I say please take good photos. In my panic I said to Judith to make sure it was put in the retainer and I would be back as soon as I could. Fortunately, as I am sure you know, the England team quickly extended our lead. So at 4-0 with about 10 minutes to go, I slipped away and 'double-timed it' back to Cherry Lakes before the daylight went.

I am glad I did, because the Common in the retainer looked huge and I thought it was going to become our 5th 40lb+ Carp. Somewhat surprisingly it went 39-08, so it was a 35+hoody for Alan and not a 40+ fleece! As you can see from both the lead photo as well as the one above, this is a cracking Common with a big frame. There is no reason why this Carp can't break the 40+ barrier if caught later in the year. I was also glad I got back (albeit slightly worse for wear...........hence I forgot to take my glasses off and probably could have held the Carp better), because the Carp was too heavy for Alan to hold up for the camera. Hence I did the honours while one of the other anglers present took the photos.

Our Bio-krill fishmeal boilies fished at distance did the trick for Alan. Alan also went on to catch a 26lb Mirror, was delighted at catching his new PB, as well as with his 35+ hoody. He is our 225th 30+ club member.

The other Carp lakes have also been a little slow with anglers probably having to work a bit harder that normal for their Carp. They have however caught some good ones. Chris Piggot visiting Cherry Lake for the first time, stayed in Kingfisher Lodge on Cherry Springs. He struggled until Sunday morning when he switched to our Bio-Spice fishmeal boilies in open water and quickly had a couple of Carp. Chris finished with 4, the biggest being this 22lb Common above.

Brothers David and Mark Heady are spending a week in Pochard Lodge on Cherry Mere. Over the weekend David, got off to a good start, and has so far managed 6 Carp, 5 over 20lb's including this 24lb Common below. He is thoroughly enjoying himself winding up his brother Mark, who is yet to get off the mark (please excuse the pun!).

Well done to all the anglers mentioned above