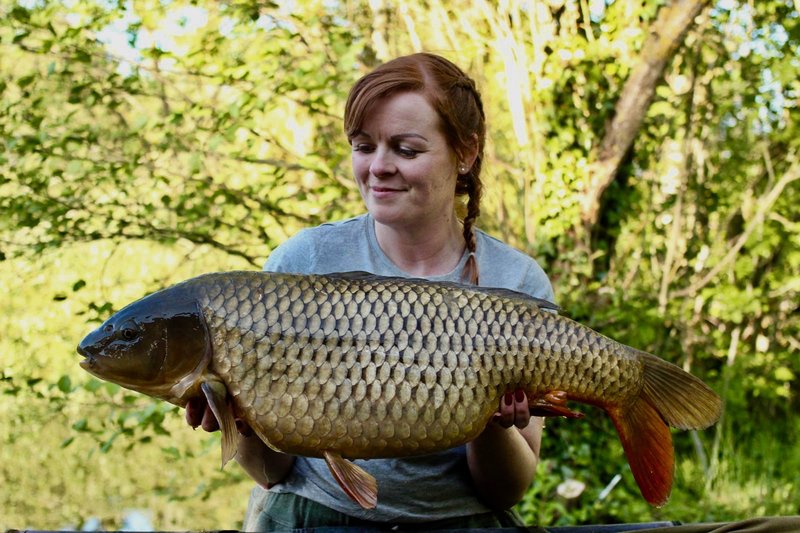 Amy catches her PB and 'pips' Nick in their match!

Brother and Sister angling 'rivals', Nick Middix and Amy Emery stayed in Kingfisher Lodge on Cherry Springs this weekend. On arrival they said they were going to have a match....the winner being the angler who caught most Carp. Nick with a gentleman's gesture allowed Amy to pick sides, and she chose the right hand side of the lake.

Initially the fishing was slow, partially because they were concentrating more on the 6 feet depths rather than the margins. When I saw them on Sunday afternoon, they were level with a disappointing mid-double Carp each. With Sunday being a glorious sunny day, the Carp were every where to be seen. I said that I thought things would pick up for them as the sun dropped. Well it certainly did!

When I next saw Nick and Amy, they looked a little jaded but still buzzing. In short Sunday night and Monday morning had been quite hectic with seven Carp landed. They both had caught Carp of just over 20lbs. Amy's 20lb Common (see lead photo above) was also new PB. Better still, as far as Amy was concerned, she had won the match by 5 Carp to 4! Nick's consolation is that he had the prettiest 20lb+ Carp....see below. I also liked the unusual selfie taken by Amy of the angling duo together. They are intending to return to give Nick a chance of winning the next match....when it will be his turn to pick sides!

Alan Collier and Malcolm Dix returned for their 6th annual visit to Cherry Lakes and fished as normal in Grebe Lodge on Cherry Lake. The lake continued to fish slowly this weekend with just 4 Carp caught across the three Lodges, 3 of which fell to Alan Collier between 03.00-05.00 on Monday morning. I hope this is a sign that the current sunny weather will warm the water up and get the carp more vigorously feeding. Small wafters being the successful approach. The 3 Carp weighed 24-12, 23-00 and 19lb. (Sorry no photos).

Malcolm suffered a blank this year, which we agreed was the angling 'gods' payback for such a good year last year when he landed, I think, 5 Carp including 'Dick', the current lake record holder, then at 39lb. See below. This Carp has not been caught since she was out at 44lb to Paul Mitchell last October. I really hope she comes out before spawning. If she does I suspect she will increase the lake record. As a consolation for Malcolm I have re-run his photo of 'Dick' from last year to remind him of better 'times'!

I have been asked several times if the Carp have spawned yet. Given the water temperature is still quite low for the time of year, 14,C when I checked it yesterday, and with the nights still cool, unless the weather really warms up I doubt if the Carp will spawn until we get into June. Time and the weather will see!