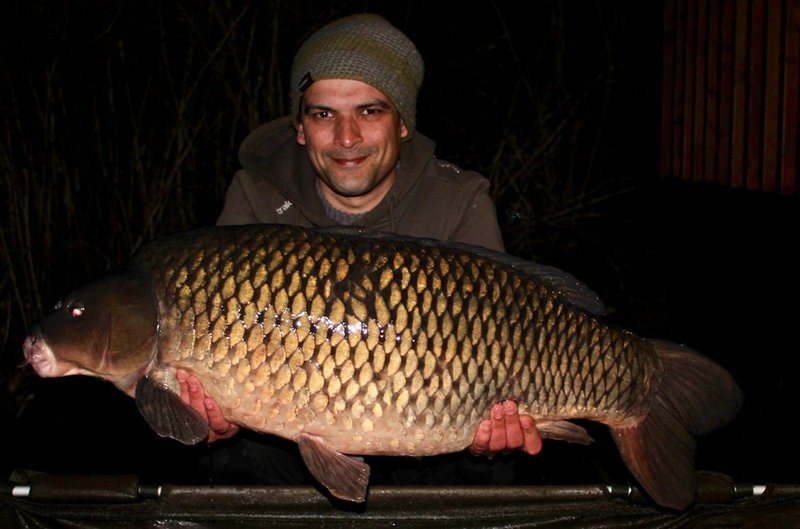 At last Cherry Lake has started to produce a few Carp. Over the last 24 hours 4 Carp have been landed and one lost. I think the Carp are also getting fed up with this weather and decided to have a ‘munch’ despite the temperatures!

Steve Shepherd got the ball rolling at 20.00 on Wednesday night with this lovely looking Common (see below) last night of 21-02. This looks a young fish and in terrific condition. He followed this up with a 23-00 Common at 01.30 and then smashed his PB by almost 10lbs when he landed ‘The Patch’, a terrific male Common, at 38-12. It cannot be too long before this Carp breaks the 40lb barrier. Fingers crossed!

Steve thoroughly deserved to catch these fish as he had doggedly plugged away since arriving on Friday with nothing to show for his efforts. He did not moan and had confidence in what he was doing. He was quite rightfully clear that he was not catching because the fish were not feeding. I wish I always had Steve’s confidence and approach. I would no doubt catch more and stress less when I am not catching!

All three of Steve ‘s Carp came on pop-ups over a bed of boilies, from two different spots which he had been steadily baiting. Given Mirror’s outnumber Common’s by at least four to one in Cherry Lake, it is interesting that it was the Common’s which switched on first. This is something I have noticed before in cold conditions.

Steve becomes the first member of our new 35+ club. He is now the proud owner of the first 35+ Cherry Lakes Sweatshirt which he is modelling below. Well done Steve…..top angling.

Joe Skipsey caught a 22lb Mirror this from Osprey with the angler in Grebe unfortunately losing his fish around mid-day. We are hopeful these anglers will have a good night tonight and if they do I will let you know!