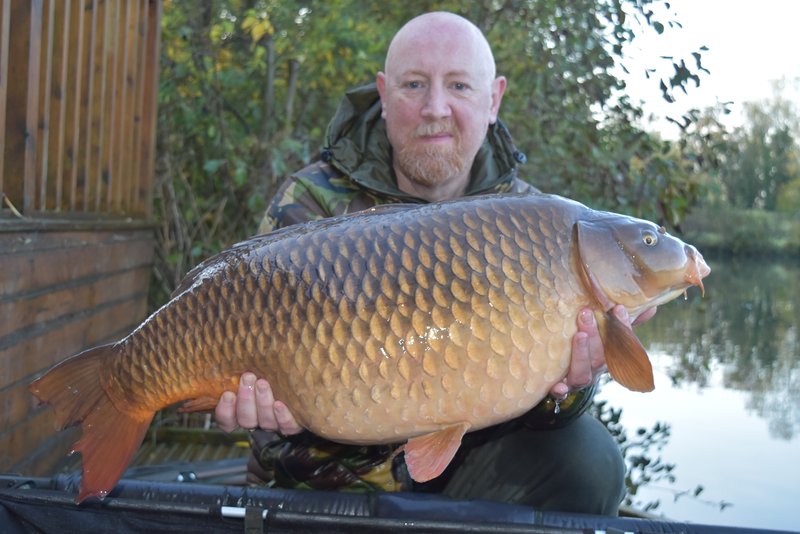 'A bad day's fishing is betetr than a good day at work!'

Water levels across Cherry Lakes have continued to rise again this week. It feels like it' s been raining for weeks. The ground is soaked and the lakes full. As I mentioned in a previous update, it feels like we have moved quickly into 'winter' fishing. The massive influx of cold water having the same impact as a series of heavy over-night frosts. I am pleased to say that there are still some Carp to be caught.

Cherry Lake has been hard work over the last week. I have however been seeing the occasional Carp roll, as well as some fizzing and bubbling. We had a 'full house' over the weekend and up to Sunday night no-one had even a bite. I was delighted to get a call this morning to say that Paul Salmon had a good one in the retainer on Grebe Lodge. I was surprised when Paul, who is on his first visit to Cherry Lakes, said that he had in fact landed two Carp. A 20lb Mirror had picked up his small pop-up fished in conjunction with a methed feeder at 23.00 to get him off the mark.

Paul then followed this up with a 32-02 Common Carp at just after 07.00 this morning (see lead photo above). This Common looks like a new 30+ for us, but as before I m not going to add it to the catalogue because it has not got any really distinctive marks. It was in great condition except for it's tail. I am not an expert by a mile, but it looks like it must have had some sort of tail rot type issue? Its tail now looks clean and healthy and fishery manager Dave is confident it will all re-grow. If not it will be distinctive in the future!

Paul's first Carp came from the deeper water in front of Grebe, whilst his big Common came from the well known channel which has been created just off the reeds by the Carp in the shallows. A small yellow pop-up fished over a handful of tasty goodies did the trick. Well done Paul.

The Jarman family stayed in Pochard Lodge on Cherry Mere this weekend, and they were also on their first visit to Cherry Lakes. They very much enjoyed their stay with son Steve catching 5 Carp including a brace of twenties including the nice 26lb Mirror(pictured above) and a 21lb Common (pictured below). Dad Melvin managed a couple of Carp. There was obviously 'something in the air' on Sunday , because Carp in Cherry Mere started to bubble and fizz like they do throughout the summer. At the same time the anglers on Cherry Lake and Cherry Springs also saw more movement and subsequent action. Steve's 26lb Mirror was caught on Sunday in the middle of the lake and this spell!

We had a very nice couple staying in Kingfisher Lodge last week. Despite the rain and the general slowness they stayed relaxed and very happy all week. So much so it reminded me of the old adage that 'a bad days fishing is better than a good day at work'!

Nathan Hurwood and Theresa Fordham-Smith certainly gave this lovely impression and were a real pleasure to see eveyday. I was very pleased that Nathan ended up with three Carp from his stay including an 18lb Mirror caught on Sunday as mentioned above. His biggest Carp was this 20lb Mirror pictured below. We hope to see Nathan and Theresa again in the future.