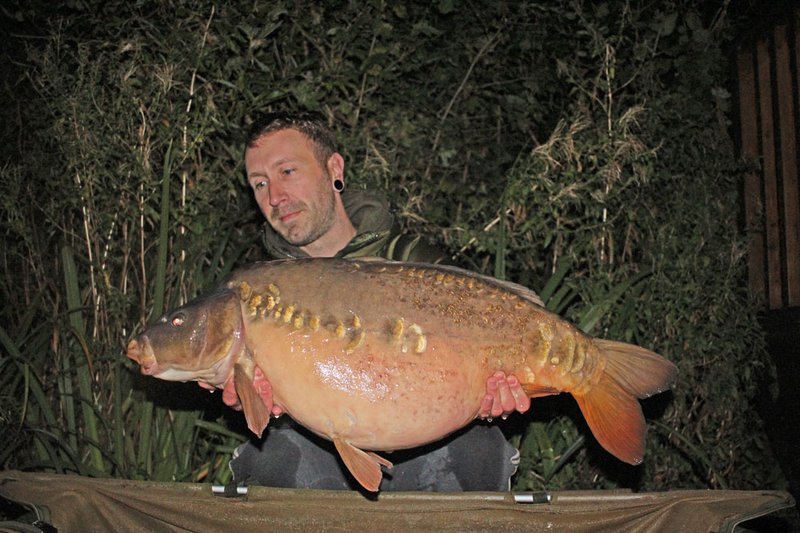 A very different weekend at Cherry Lakes. With a very welcome (from a water level perspective) two day monsoon followed by a cold night, the water temperatures have dropped this weekend with the fishing slowing up on all lakes except Cherry Pool.

Richard Tweed fishing from Egret Lodge on Cherry Pool had over 20 Carp to 16-04 as well as a range of species on the method feeder, whilst Jack Gardiner landed 8 to 19-04 from Cherry Springs.

The fishing on Cherry Lake was quite tough. Whilst the Carp were frequently showing they did not appear to be feeding for the anglers. The anglers in the Lodges were not too worried and did not complain about the rain, because as one of them said to me ‘the Lodges are the best bivvies in the world’. Their partners certainly agreed whilst sitting in the warm and out of the rain!

We did however have two Carp landed from Cherry Lake. It is often the case when fishing is slow that it is the bigger Carp which are most likely to turn up. This weekend proved to be the case with two anglers joining the 30+ club as the 109th and 110th members.

We are particularly pleased as one of these Carp is another new thirtiy for us and further evidence of good weight gains and growth rates achieved through such a long hot summer. This brings the total of different thirties from Cherry Lake this year to 24.

Our good friend Brian Hamilton stayed in Osprey Lodge this weekend and has visited Cherry Lakes many times. He previously has never broken the 30lb+ mark. He did so on Sunday morning when he caught this Mirror below at 30-08. A new PB for Brian. As you can see it was very wet at the time. Fishery manager Dave Bowen did the honours with the photos and weighing. This Carp cam from the near margin on a small boilie wrapped in paste. Well done Brian for trying and succeeding on something different.

Vince Jewitt by contrast was on his first visit to Cherry Lakes. A present from his partner Becky Howland. Having struggled for most of the weekend, Vince decided to focus on the middle for his final night where he had seen some signs of carp activity. He is so glad that he did as at 02.00 on Monday morning (night) he landed a 30-12 Mirror.