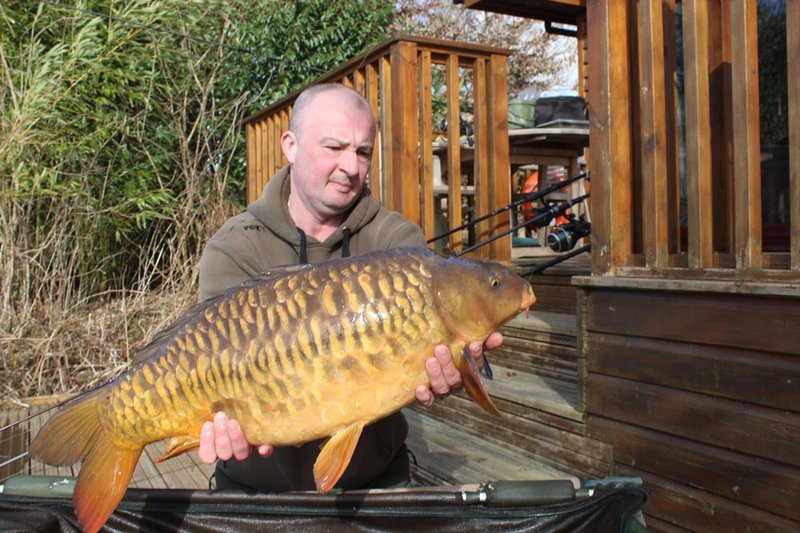 The Carp are waking up

and they are catchable!

Along with most of the south, the weather has been very mild for the last couple of weeks with several nice bright days and no hard frosts. As a result we are seeing more signs of fish activity across all our of our lakes.

Frustratingly given the weather we are not as busy as I would like, particularly on Cherry Lake, to see how active the Carp are. Sometimes fishery manager Dave has the best job in the world……as he has been paid to go fishing for a couple of days this week! He dropped into Osprey Lodge as we are quiet after saying that he had done all his jobs!.

I am pleased to say that as a result 3 Carp have seen the bottom of the landing net this week. Two of these were Carp of 23lb+ including this good looking almost fully scaled Mirror of 23-08 below. The successful tactics were small baits fished around the middle of the lake. Dave also mentioned that he thought the Carp were feeding towards the far bank area but he could not get a pick up there.

Gary Hockham returned to Pochard Lodge this week and was delighted to catch a new PB, a lovely Mirror of 27-08. I got a call on Wednesday from Dave telling me about this fish which Dave said was stunning and in great condition. Dave also said that he weighed the Carp himself. She certainly looks good in her winter colours.

It is sometimes hard to judge weights of Carp from photos, often the way they are held can make a big difference. It is interesting to compare the two photos below. Dave’s fish looks bigger because he is holding the Carp in a ‘classic pose’ style, whilst Gary is holding it close to his body. The weights though are correct.