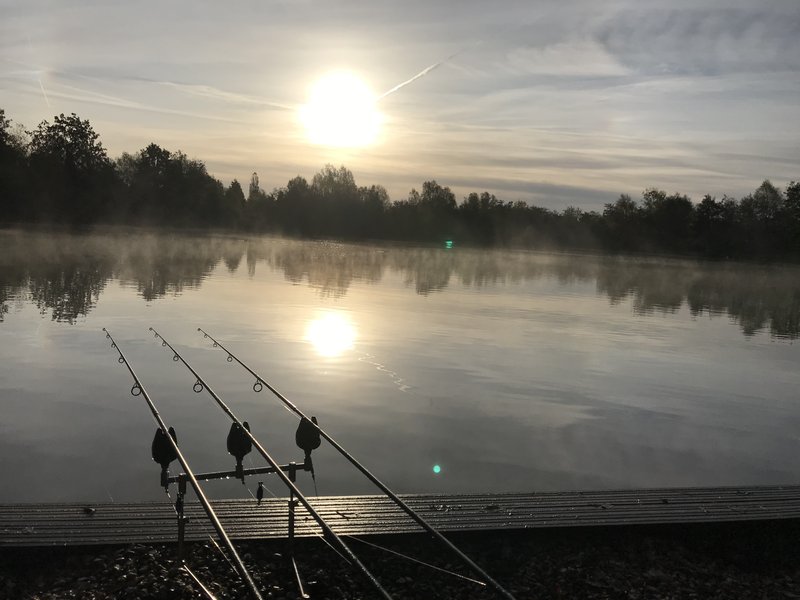 The Chappell's lead the way in difficult conditions

A very disappointing last 5 days or so here at Cherry Lakes. Although the weather has been warm, it has also been very wet. The River Churn, which runs along the northern boundary of Cherry Lakes has been 'roaring' through with the highest river levels seen for the last few years. The impact of this has been to drive a big increase in water levels, in particular on Cherry Springs (where I guess it is up almost a foot, and Cherry lake which is up 6-9 inches. This has inevitably led to a rapid influx of cold water, which a always puts the Carp off the feed. This has certainly been the case for the unlucky guests this week on Cherry Lake where only 1 Carp has been caught over 4 days and a Cherry Springs blank!

Before I owned Cherry Lakes, I always assumed neighbouring lakes would always have the same water level. I now know this is not the case. Cherry Springs, when we had the complex surveyed, was found to have a water level some 60cm higher than Cherry Lake or Cherry Springs. I believe this is due to the fact that it is the closest lake to the River Churn. Indeed when the river is flooding, as well as the normal inflow of water below the surface, we sometimes see little springs appear in the bank above the water level of the lake. This is because the river level is higher than that of the lakes. This is the reason why we re-named the lake as Cherry Springs in 2014 after aquiring what is now Cherry Pool.

As I indicated in my last update I do have news of two more additions to the Cherry Lake 30+ club. Last Thursday Manuel Fernandez smashed his PB when he landed this 30-08 Common above from Grebe Lodge and became the 155th member of the Cherry Lakes 30+ club.. This Common has a very distinctive mouth shape and has been landed several times year, including by Joe Baker at the same weight in April. Well done Manuel

Cherry Lake started to slow down at the weekend, but this did not stop Doug Sharpe, fishing from Osprey Lodge, from landing several Carp including this Mirror of 30-02 above. As well as becoming the 156th memeber he also landed our 41st different Carp over 30lb+ of the year. Both Doug and us were very pleased with this Carp! This Mirror came I believe on a small pop-up fished over pellet and crumbled krill boilies. Well done Doug.

The superstars this week however have been Peter and Luke Chappell fishing from Pochard Lodge on Cherry Mere. Whilst greater numbers of Carp have been caught in similar length sessions during the year, their catch of 8 Carp to date this week is a very good result given the conditions. The water level in Cherry Mere has increased, probably around 4 inches. Maybe this lower volume of 'new' water was not enough to completely knock the Carp feeding on the head?

They are 'superstars' in my book because of the quality of their photos as well as catching some lovely Carp. I just love the early morning photo of Luke holding a cracking Carp with 'steam' rising from the lake. See main photo above.

Both father Peter and son Luke have caught some lovely fish, with Peter catching two biggest Carp of 22-04 (Common) and the 22-05 Mirror pictured above. I personally thought Luke's Carp above and this 18lb Mirror below were prettier! Well done guys.