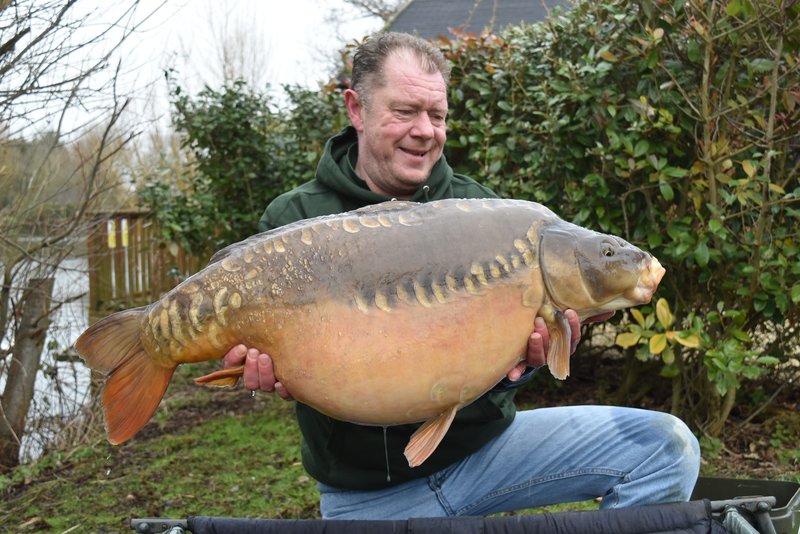 Charlie England does it again with a brace of 30's

Charlie England continues to excel on Cherry Lake and his winter campaign is going from strength to strength. In my last update you can see that Charlie had landed a fabulous brace of Carp including a 37lb Common and Mirror of 34-04 along with 8 other Carp. Well he has just done it again! Another brace of thirties.

The bigger Mirror of 38-02 was caught earlier today around 09.30 and was the last of the three big Carp caught over 48 hours by Charlie. See pictures above and in the lead photo. As before Charlie has been presenting small baits consistently in several silt pockets which he has identified. This particular Carp came from a depression just off the far reeds.

This particular Carp does not like to be photographed too often. It is rarely caught as well as growing well. Both Dave and I recognised her but could not remember what her last recorded weight was. Looking through my catalogue of pictures of 30lb+ Carp, I was very pleased to see she had not been caught in 2019 and hence not included in last year's catalogue or numbers of 30+ Carp. In fact she was last caught by Ken Clarke in August 2018 at 30-02. She has put on an amazing 8lb since then. Needless to say we are delighted by this weight gain.

Charlie landed a second 30lb+ Common of his February campaign, when he landed this 30-12 Common pictured above. As you can see the weather was atrocious at the time with the rain coming down in buckets. As you can imagine Charlie and I did not hang around when taking the photos!

This lovely Carp was caught last year by Jason Booth at a similar weight of 31-04.

Charlie has now caught half (4) of the thirties+ caught so far this year. Of the 8 different 30lb+ Carp of 2020, 4 have been 35lb+ plus a Mirror of 41lb. 6 of the thirties caught are showing good weight gain on last year which augers well for the rest of the bigger Carp stock. Well done Charlie.....outstanding!

I will produce an overall summary of winter fishing on Cherry Lake in early March (01 December to 29 February being the recognised winter season).

Charlie very nearly had three thirties in a row. This 29-12 Mirror was caught on Monday shortly after his return from a weekend at home. This particular fish, which looks relatively lean, is another one of our Carp coming through as it has not previously featured in my 30's catalogue. It certainly has the frame to carry more weight.

With the weather continuing to be unsettled and mild, there is no reason why the Carp fishing does not pick up speed further from here. The increase in light levels during the second half of February always gets the Carp moving at this time of the year.....and as Charlie has proven repeatedly they certainly are!

Just to show it is not all Charlie, Clive Bashford who is staying in Heron Lodge has had two Carp so far since Monday.

We have the following vacancies over the next couple of weeks before the prices go up, notably

Egret Lodge on Cherry Pool is also available between 24 February to 06 March. Again before prices go up.