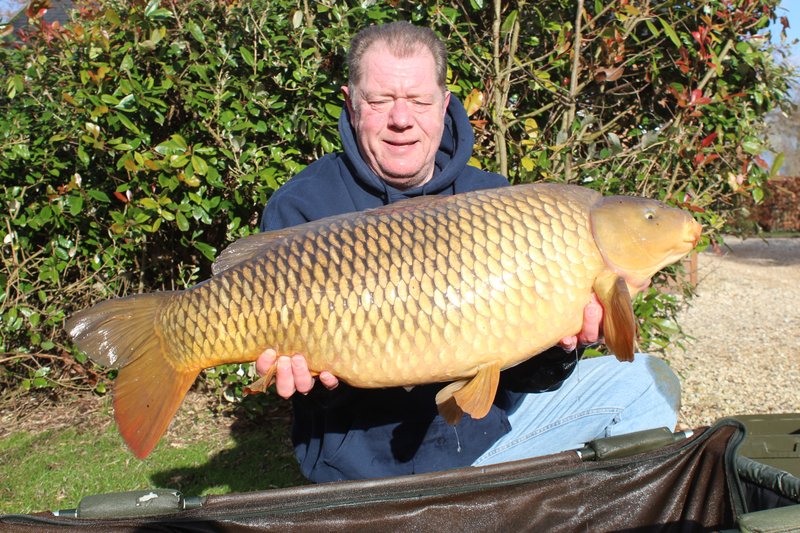 We have just returned from a few weeks away, much of which left us 'incommunicado' with Cherry Lakes. During one of our brief periods with WiFi, we did manage to get an excited update from fishery manager Dave, about the amazing result Ian Blackwell and Ian Taplin had on Cherry Mere, and Malcolm Williams captures from Cherry Pool. The result was the last two posts......which due to today's amazing technology.......were posted from another continent (in fact from the Amazon!).

We have had a good number of cracking fish caught whilst we have been away. Thank you to all the anglers who have sent me photos, all of which are much appreciated. However rather than trying to cover all the other captures of the last few weeks, I thought I would simply write about the last few days. Apologies to anyone who was hoping to be a Cherry Lakes 'media star'........there is always next time!

Charlie England has decided to spend a lot of time on Cherry Lake this February and has been staying off and on in Osprey Lodge. Over the last couple of weeks, he has landed 8 Carp which is pretty good for winter fishing. Following on the heels of storm 'Ciara', Charlie had a real result earlier this week landing a 37lb Common and 34lb Mirror Carp.

On Tuesday Charlie landed his biggest Carp from Cherry Lake to date when he landed the 37lb Common pictured in the lead photo above. This impressive Common, which is two-tone in colour, picked up his small pop-up fished over a small amount of crushed boilies and hemp just before mid-day. After a good scrap, Charlie became the 162nd member of the Cherry Lake 30+ club, when the Common graced the bottom of his landing net!

This Common Carp was last caught by Rix Huxley last August at a weight of 35-04 (see photo immediately above). As you can see from the lead photo he (I think it is a male Carp) looks in great condition, has over-wintered well and continues to grow steadily. You do however have to work harder to see the two-tone colours. For comparison purposes I have repeated the Rix Huxley's photo above where the two-tone colours are much more noticeable.

Charlie's second thirty came on Wednesday some 24 hours after the big Common and weighed in at 34-04. Similar tactics were used by Charlie. It is interesting that Charlie has caught the majority of his 8 Carp during the late morning and mid-day period (10.30-14.00). The Carp have apparently preferred this time slot for feeding since December. The latest he has had a take is 20.00. I would like to claim credit for 'training the Carp' to feed in such a 'sleep friendly' way.......but unfortunately I cannot!

This is another Carp which is comfortably up in weight and is growing well. See picture immediately above. She was last caught in September by Aaron Williams at 31-04.

I also could not resist publishing Charlie's photo of a 23-12 Common which he caught earlier in his stay. I love the shape of this young Common. Providing she stays safe she will be a big one in the future.

We have a good number of vacancies for March still remaining. With this mild weather forecast to continue its probably worth giving us a go early this year......not least because we are booking up fast for the warmer months.

In particular the Cottage is currently available throughout most of March we are offering deals for any bookings for the Cottage which are taken during March. Interested then please call 01285 869887.