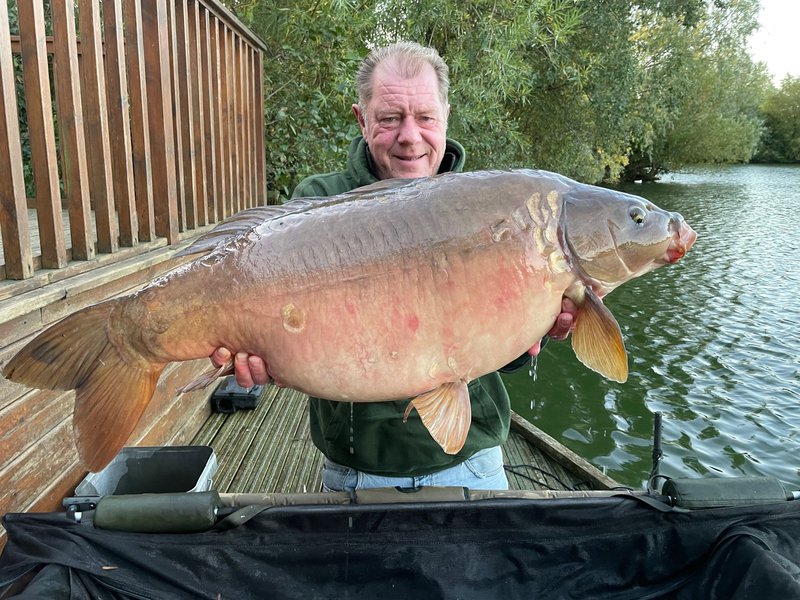 The lakes are fishing how you would expect at this stage in October. With the water temperature slowly dropping (fortunately no frosts yet), the Carp are fishing in bursts rather than all the time. They also at times seem to be feeding hard on naturals rather than anglers baits. The Cherry Lake Carp are also still behaving slightly out of character in that they are as likely to be caught at night as in the day.

As the water temperature continues to drop the fishing will get harder and patchier. Whilst I have had some excellent results in November in past years, I have often found November (especially after the first hard frost which normally arrives around Halloween) to be the least productive month of the year.

We have seen around a dozen Cherry Lake Carp caught which is not a bad return. They have come in bursts. Typically 2-4 Carp caught within 12 hours or so and then 2-3 days with nothing caught. As well as Dick being caught at 48lb (up nearly 3lb since early September), which given the damage to her pectoral fin (see last update), and to save the embarrassment of her captor, I am not going to feature here. We have has four other 30's caught which I have featured here.

Charlie England is a good friend and a regular visitor to Cherry Lakes. He tends to prefer fishing at Cherry Lakes during the winter and has for the last few years has kicked off his winter campaign with a session around the third week of October (which I know is before the normal start of Carp fishing winter of 01 November). Indeed this time last year, he landed Dick at 49-12 and how I wish he could have caught her this time as I know she would not have been badly damaged.

Charlie caught 6 Carp during his stay. He landed three upper twenties along with a 31-04 Mirror and the Mirror which I call 'Pac-mans mate' at 32--04. This Carp has a scale which resembles a 'Pac-man' on one side of it's wrist, (which you can see in the photo above), but not on the other side. The Carp which we call 'Pac-man' is several pounds bigger and has the 'Pac-man' scales on both sides of it's wrist. Hence 'Pac-man' and 'Pac-mans mate'. (Judith says this is me behaving like a old schoolboy making up names based on ancient gaming technology!).

The biggest Carp of Charlie's current visit came at around 04.30 in the morning. A very impressive Mirror of 38-08 (which I suspect is a big male fish), which was last caught by Brian Round in April at 37-04.It looked like it would break the 40lb barrier but the scales unfortunately have a better 'eye' than me!

Charlie's success is based on several key factors. Firstly he is good angler who is always studying and watching the water. Whilst he has several preferred spots in Osprey's water, he will try new positions on occasion if he can see a feeding pattern develop. This worked for him this time when a shift to a new area of regular activity resulted in the big 38lb+ Mirror.

He is also very patient. He is super confident that his feed mix which includes hempseed and sweet additives, will attract the Carp and eventually entice them to feed. He also does not question his rigs or set up, he knows it works. If he is not getting any action it is probably because the Carp are either (a) not feeding and/or (b) not in his swim.

By taking this patient approach his swim is not littered with many different positions with feed, and he will get action when the Carp feed in his swim. This strategy is even more important in winter as the Carp's activity and feeding spells reduce and shorten. Even during this latest visit when he was comfortably the top rod, he did go 3 days without a sniff! Top angling as always Charlie.

First time visitor Andrew Thomas was pleased to break the 30+ barrier at the first time of asking when he landed this lovely 33-04 Ghost Mirror Carp. Andrew fished a single dairy-cream boilie along with just 5 others to set a trap which this fish found irresistible. Very nice!

Apologies as I will confess to still being down about the damage to 'Dick' and cannot find my normal 'enthusiasm' for these updates! Hence a shorter report than normal. Depending on catches of course, and photos provided by anglers, I will aim to give a fuller update next time.