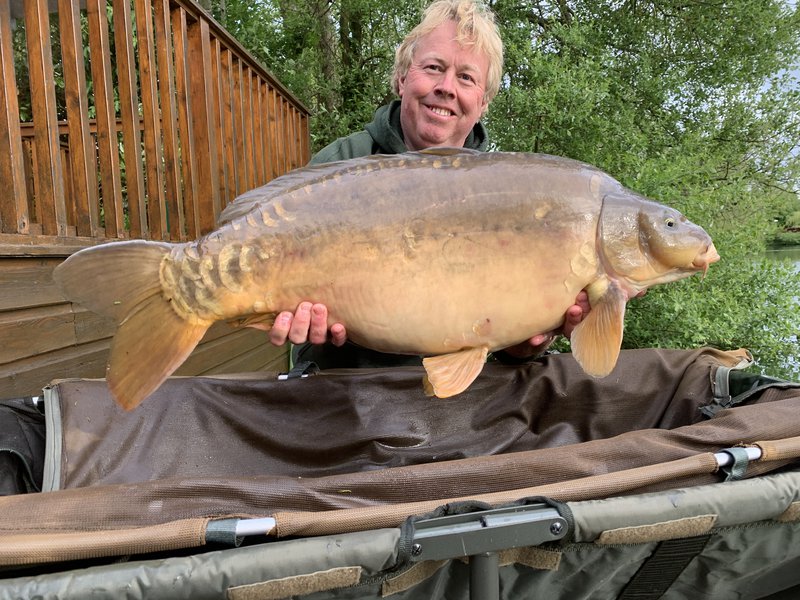 Charlie England has just finished his amazing February winter campaign on Cherry Lake. With the exception of several weekends Charlie has been with us throughout February staying in Osprey Lodge on Cherry Lake. I have to say it has been a real pleasure getting to know Charlie over the last few weeks. As an 'old school' Carp angler, who has been around for a long time, it has been good to listen to his 'fishy tales' and gossip about some of the names of the present and past! Judith has told him off for making me too many cups of tea because it encouraged me to 'keep disappearing!

Charlie has caught reasonably consistently throughout the month landing 23 Carp. He did have several spells of 3 day blanks as well as several days where he caught two or more Carp. In total he landed 6 different thirties. This bag of 30's included the 37lb and 34-04 Carp featured in my post of 15 February and the 38lb Mirror (pictured immediately above) and 30-12 Common featured in my post of 19th February. Since my last post he has caught a further two thirties which I will cover later in this update.

As you can see from Charlie's record sheet below, only 4 of the 23 Carp caught were below 20lb. Interestingly as you can see three of these came in the first four Carp caught. Of the 13 twenties caught 7 were over 25lb including two 29's.

Charlie's 5th thirty of his visit was the 31-04 Mirror pictured in the lead photo above. He used the same approach throughout his stay. Small amounts of feed and small baits fished in the same three spots continued to do the business. We were very excited with both this fish as well as his next biggie (pictured below) because both are new 30's for us. Further signs of how well the Carp have over-wintered.

His final thirty of his February trip was this 31-00 Mirror below.

What more can I say. What a great campaign and great winter result Charlie. Extremely well done and top angling.

I will undertake a review of the winter fishing here at Cherry Lake in my next post. Given Spring officially starts on Sunday it seems an appropriate time to do so.

We have plenty of vacancies across Cherry Lakes during March. If you fancy a break and the chance to escape the Coronovirus doom and gloom then giver us a call on 01285 869887