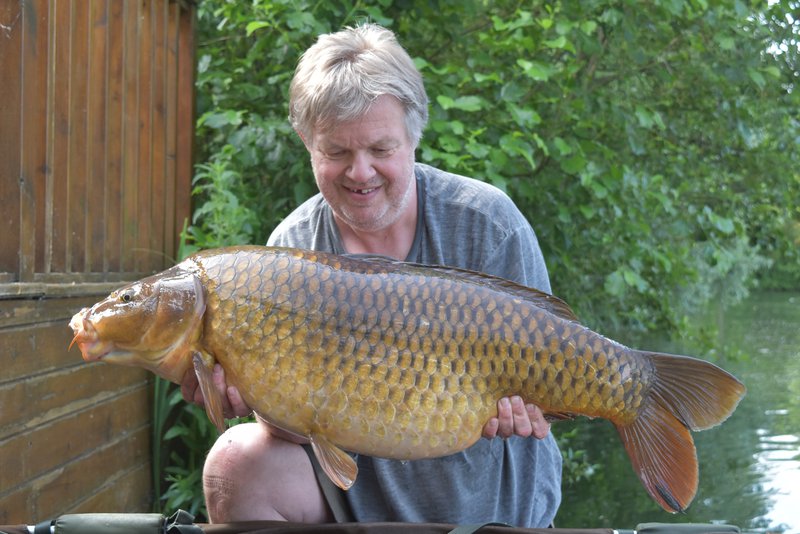 The Cherry Lake Carp have yet to spawn.

Unfortunately the bigger Carp did not appear to spawn on Cherry Lake before the weather broke last Wednesday and with the water temperature down by at least 5C to around 17C, I doubt they will be spawning anytime soon. Assuming the bigger females are frustrated at having 'prepared themselves', I now expect these Carp to 'disappear and sulk' for a while, until we get the next warm spell. Time will tell. Enough of spawning for now!

The fishing has been steady on most lakes except unusually on Cherry Mere which has definitely switched off. We have no idea why it has got so slow. I cannot really comment about last week as I was away for a few days, but whilst we only had a handful of Carp caught from Cherry Mere this weekend, there were plenty of signs of bubbling fish etc. Maybe they were on the naturals (Carp fry from the recent spawning?)

Since my last update we have had several good catches from Cherry Lake.

The Tackle Box fishing shop manager Peter Jones has been a regular guest over the last few years, and has been staying in Grebe Lodge with his wife Angela. As always Peter has done well, and he has so far caught 11 Carp. With four days remaining of his holiday, he is hoping for more.

I would normally expect a higher percentage of 30's in a 11 Carp catch. Interestingly, Peter was fairly sure that just about all the Carp caught were male fish. This would be consistent with the weights of the Carp caught as well as our previous observations that the bigger Carp 'disappear' when they are ready to spawn.

I reported in my last update that first time visitor Chris Pollock, who was fishing in Osprey Lodge was doing very well. His 3 Carp catch up to last Monday included a cracking 32-04 Common (see last post). Chris went on to land 11 Carp, including a repeat capture of the 32-04 Common, which was a great effort in the conditions and an impressive first visit.. I have copied this list from the e mail he kindly sent me.

The 32 heavily scaled Mirror is pictured above. This Carp was last caught in July 20 by Martin Eagle at 30-04 and is a further addition to our 2021 30's catalogue which is expanding fast..

Colin Murphy, who was also on his first visit to Cherry Lakes this weekend, also did well in Osprey Lodge. The Carp were obviously feeding hard all over the lake when he arrived. Indeed as we stood on the decking talking about the swim, rules etc, we saw at least 5 Carp show and fizz within 25 meters of the Lodge. Wisely Colin just decided to cast small bags at the showing Carp and by 02.30 Saturday morning, when he reeled in to get some sleep, he had landed 4 Carp including a Ghost Mirror of 35-02 (see above). This particular fish was last caught by Gary Owen at a similar weight in April.

I did say to Colin that I have also been known to reel in knackered when night fishing gets too hectic. The risk though is that the Carp stop feeding when you wake up! Well they did. His final Carp did not come until early on Monday morning. A nice Mirror of 27-08. Well done Colin on joining the 30+ club as our 223rd member.

Andrew Scott is one of our regulars who thought he would give Cherry Lake a go for a change. He was very pleased with his week's efforts. His 5 Carp catch from Heron Lodge included a new PB of 32-06. Unfortunately from a photo perspective, i was away and the photos he had were not great. I have included the best shot below.

This is a classic Cotswold style Carp, which neither Dave or I recognise as one of our population of 30's. So now I have one side of a very interesting carp in my 30's catalogue and unusually I am now hoping it won't be too long before it makes another appearance. Andrew is our 222nd club member.

As always well done to all the anglers mentioned above.