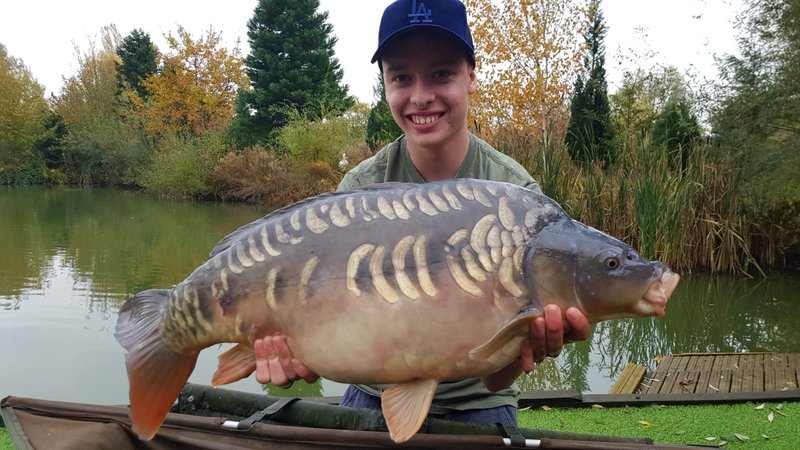 We have been away for the last few of weeks and hence the absence of any news from Cherry Lakes. The change of the seasons has been very marked to our eyes . The trees still had most of their leaves when we left and the primary colour around the lakes was green. The trees have now largely lost all of their leaves with the primary colour shifting to brown/yellow as everything else like the leaves and reeds are dying off.

The fishing on Cherry Lake has slowed up considerably as a result of several hard frosts around the end of October. The biggest Carp over the period was a 29lb Mirror. A young fast growing an attractive Mirror according to Dave (sorry no photo). It feels like we are entering the early part of winter, where fishing is often at it’s slowest. The Carp are still catchable but it is slow growing. Small baits are often the key.

We will continue to feed regularly with boilies in the run up to Christmas. The best way to keep the Carp feeding at this time of the year is to ensure bait continues to be introduced regularly. Given that the number of anglers visiting is low, we want to ensure the Carp have access to a regular supply of bait and there is something available for them when they do want to feed. We have plenty of vacancies if you fancy a challenge as well as some fresh Gloucestershire air! Call me on the usual number 01285 868887 if you fancy a short break.

As I have said before , I think the Lodges really do excel when it comes to winter Carp fishing. My ‘hard core’ fishing days, where you have to lie on a bedchair in a bivvy for the 15-16 hours of darkness (not forgetting most of the daylight hours when it is too cold/wet to be outside) and cold, are now behind me. The Lodges eliminate the long hours of boredom and are supremely comfortable. My idea of sensible winter fishing! With only a few anglers booked on over the coming weeks I might even get my own rods out!

Personally, and particularly this side of mid-January, I think the small exclusive lakes are much better choices than Cherry Lake for all but the most committed big Carp angler. The higher stocking density and smaller lake sizes mean that your baits are never too far from Carp. The higher stocking density also means that they have to compete to feed, even in the depths of winter. Hence you have a good chance of action on these lakes almost regardless of the weather.

Over the last few weeks the smaller lakes have been the most productive, with anglers reporting some good catches. Graham Dixon on his first visit to Cherry Lakes caught 8 Carp to 29lb, including a 22-08 Mirror from Pochard Lodge on Cherry Mere despite the frost. Joshua Rose followed this up a week later with a number of good Cherry Mere Carp including this stunner of 24-06 (main picture above).

We also had two very unusual catches whilst we were away. Our good friends and regular guests Malcolm and Sylvia Williams stayed in Egret Lodge in early November and caught 20+ Carp during their stay including this Koi Carp above of 20lb. This is one of a small number of Koi’s in Cherry Pool which are often seen but rarely caught. Indeed I have not seen this one on the bank before. Well done Malcolm.

Even more amazing to Dave and I, was Flavio De Jesus’s catch from Grebe Lodge. A very long 25lb Pike snatched his boilie when he was reeling his bait in. Before this capture I would have sworn that there were no Pike in Cherry Lake. We have not seen this Pike in the water, we did not find any Pike when the lake was drained in 2012 and we have not stocked any? So I am at a loss to explain it’s presence. Regardless, and as Pike do, it has thrived on neglect as well as a diet of Perch and possibly some small Carp. Well done Flavio!