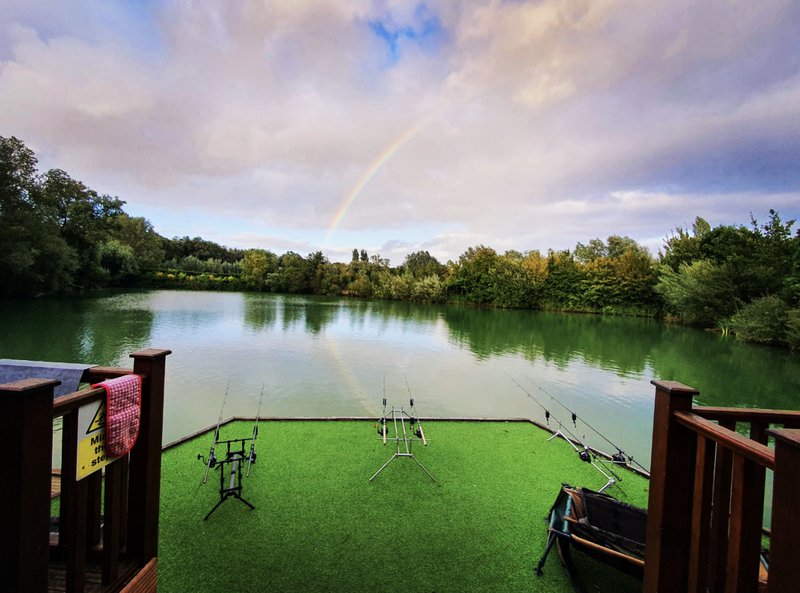 Is Maria Cleary the happiest angler of the year?

I was intending to use this update to focus on the other lakes, but with a number of good catch reports and to avoid too many photos in each update, I am going to separate Cherry Mere and Cherry Springs up into two updates.

Cherry Mere has fished consistently throughout the summer with the Carp still playing 'ball' at some time over the 24 hour period even at the height of the heat. Similar to the other lakes it has picked up speed since the temperatures started to drop.

Neil Rowe and his partner Maria Cleary along with brother Glenn Rowe returned to Pochard Lodge on Cherry Mere last weekend and had a great session. Whilst Neil Rowe led the way with the number of Carp caught (from memory he had 8 to 23lb), it was the catches and photos from Glenn and Maria which caught the eye!

My favourite photo of an angler with a Carp so far this year must be the shot above of Maria with her new PB, a Mirror of 21-08. She looks absolutely delighted with her new PB.

Maria also sent me this scenic shot in the lead photo above which was taken this weekend from the decking of Pochard Lodge. I thought the inclusion of a 'oven glove' made it even more personal!

Judging from their catch returns they found the 'pot of gold' at the end of their Rainbow this weekend in Cherry Mere!

Glenn Rowe had the honour of landing the biggest Carp of the family trip this weekend when he landed this 32lb Mirror below. This was also Glenn's new PB. This Carp was caught earlier this year by Sam Smalley at 30-08, so she is doing well following spawning. In all the excitement I cannot remember what tactics they used......sorry as they were clearly successful. Well done all and thanks for the photos.

It was the Richardson's family turn in Pochard Lodge this week. Dad Ian and son Sam (age 12) have been the anglers this week. The results have slowed a bit, but that has not bothered Sam who is comfortably out-catching his Dad! Sam in fact is delighted to have smashed his PB, with a 29-01 Mirror Carp pictured immediately below.

Sam also went onto catch a couple of twenty pound plus Commons including this one of 20-04 below. I have to say how impressed I was at Sam's handling of the Carp. He certainly has the 'Carp photo pose' of an experienced angler. Well done Sam.