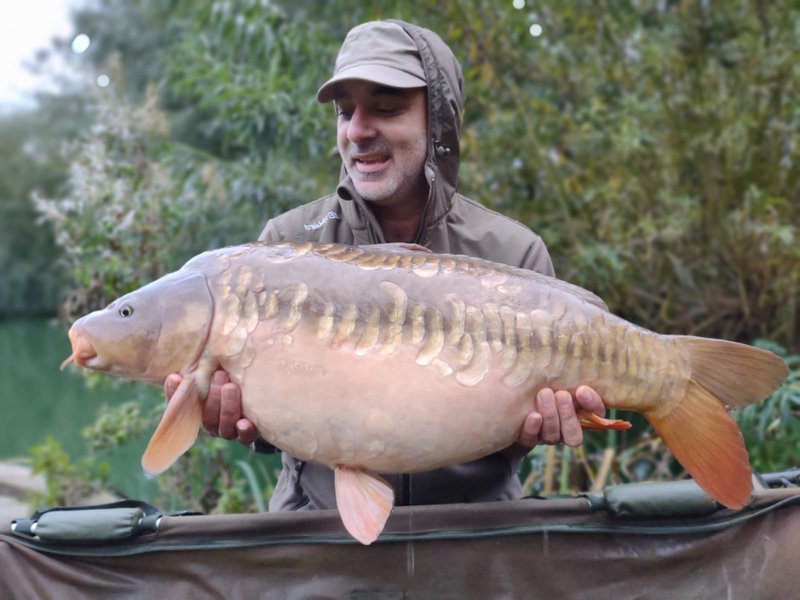 A productive week across the complex with some cracking Carp being caught from the three principal Carp lakes. I will start with the exclusive lakes.

The Alam family are the record holders for the most fish in a week's trip from Cherry Springs . In August 2020, they caught an amazing 78 Carp from Cherry Springs. This catch included 7 twenties with twins Leon and Hannah, as well as Dad Jav, all landing fish over 20lb's. Hannah's 24lb Carp was also set a new PB for herself at the time.

On arrival on Monday, I made the point to them not to expect the same this visit, saying they were 'more likely to blank than catch a hat full' (Judith says I was at my 'miserable best' for saying this)!

I am delighted to say they proved me wrong! Hannah and Jav, undertook the Lion's share of the fishing this visit, fishing left and right from the platform respectively. Together they shared 15 Carp (one of which was caught by Leon, who is no longer as keen as his twin sister). Within this total they landed 5 over 20lb to 28-02 and a new thirty at 30-06. As well as the Carp looking like they are again putting on weight, this ratio of 20lb+ Carp to doubles (less than 1:3 compared to our normal expectation of 1:10) is much better than we would usually expect. It is probably because that the bigger Carp have continued to feed for longer than their smaller cousins.

The explosion of the Roach population in Cherry Springs has resulted in the Carp losing weight over the last couple of years. The Roach have been much quicker to get on the pellet which we normally feed than the Carp. Removing over half a tonne of Roach last winter, coupled with a move to feeding our large 16/20 mmm barrel pellets (which are much tougher and take several days to lose their integrity, hopefully ensuring the Carp and not the Roach feed on them), has I believe helped to improve both the size and condition of Cherry Springs Carp. Certainly the Alam's think so!

Jav's 30-06 Mirror Carp was one of two thirties caught within minutes of each other (see John Rutherford below) on Wednesday morning and had me running around! This lovely Carp, pictured in the lead photo above, is a new 30 for Cherry Springs and our first thirty of the year from the lake.

Hannah's 28-02 Carp above, is a new PB for her. This Carp came at about 01.00 and I understand she comfortably beat Jav to the rods! I have to say what a good angler she is, and in particular how well she handles the fish. Hannah's fish handling skills are evident in the photos above and below Well done to the Alam's.

Good friends and regulars Steve Keen and Stuart Crafer decided to have 'social' on their latest visit and left their wives behind, deciding to fish together this week in Pochard Lodge, Steve was very kind to let Stuart have the left hand side of the platform to fish from. As a result Stuart gave him a 'good kicking' recording 14 Carp during his stay to Steve's 5. Steve's biggest was a 24-06 Mirror caught at 01.30 during his last night. Stuart had several twenties plus this Mirror of 30-02 pictured below.

This is a new thirty for Cherry Mere, and unbelievably the 7th different Carp over 30lb from this amazing little lake this year. Well done Stuart (and Steve)!.

The best bit of angling and a real example of putting the Carp first was provided by Adam Smith fishing from the Cottage swim. Adam caught 5 Carp (four of which came during the dark hours), four of which were twenties, and he landed the big long Common known as 'The Patch' .

We have been waiting a long time to see this Carp (it was last caught by Tom Nixon-Taylor in July 21 at 42-12). Straight after he caught it he called me at 02.00 in the morning to say he had caught a massive Common but it had turned upright in the retainer. Needless to say I was (too) quickly there. Long story short, after holding it upright in the water and moving it backwards and forwards to get some water across its gills, the Carp gave a good kick and shot out of my hands. I think he will be alright and even bigger when we next see him. The next week will tell.

My mistake was not to grab my chest waders (I was punch drunk having woken suddenly in a deep sleep) . This would have enabled me to get in the water properly and I would have had a better grip on the Carp and probably held it for a little longer. I am extremely grateful to Adam for being so diligent and calling me straight away. Had he simply put it in the retainer and gone back to bed and not checked the fish, we would probably have lost this magnificent Carp.

Adam had weighed 'The Patch' at 46-12 before placing in the retainer for the photos. At 46-12, it sets a new Cherry Lake record for a Common, and is our second upper forty in two weeks. If he told me the Carp weighed 50lb, I would not have questioned it because The Patch looked enormous! Unfortunately for Adam, given the clear priority to look after the Carp, he did not get any photos, which is why I have repeated below the shot of 'The Patch' when last caught by Tom.

Thank you again Adam, you are a star as far as I am concerned.

We have had a further two 30's caught this week from Cherry Lake. The first a heavily scaled Mirror weighing 36lb caught by first time visitor John Rutherford from Heron Lodge.

This fish came at 07.30 on Wednesday morning just before Jav Alam's thirty from Cherry Springs above. This Carp did not look 36lb to me (I probably lost my 'weight assessing bearings' having seen 'The Patch' above). It is even harder to tell from the photo given the way in which it is being held. This Carp was last caught by Chris Pollock in June at 32-04. Given this previous weight, and the fact that I weighed it (albeit on digital scales which I hate), confirms to me that it has put on weight. It also shows how well the Carp are doing. Well done John, and see you again next September.

Further evidence of positive weight gain this year has been provided by regular Oliver Wells who landed this leathery Mirror of 32-08. At first I thought this particular Carp was the same one as caught by John Holland in May at 32-00. However on closer examination on the screen, with the fish side by side, they are clearly different. So Oliver's Carp is another new thirty for us. We have now recorded during 2021, 61 different Carp over 30lb including five over forty pounds.

Well done Oliver and to all the anglers mentioned.