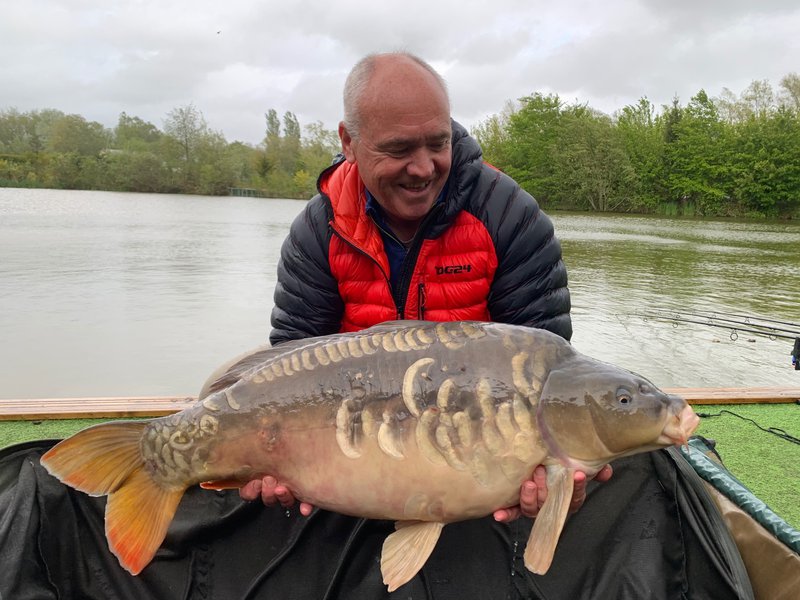 Cherry Springs Mirror is the 4th x 30 of the year.

Callum Dodd stars on Cherry Lake with 2 x 30's including another new one!

We have again seen some cracking Carp caught over the last week, and with fishery manager Dave on holiday, I can barely keep up.

I will start with Cherry Mere. Last weekend good buddies Giles Rooke and Kiran Patel stayed in Pochard Lodge on Cherry Mere. Together they shared a 12 Carp catch that included 5 twenties including the Ghost Common at 27lb and this cracking Common pictured below at 25-04. They sent some lovely comments through on their return home with a promise to return.

They were followed onto Cherry Mere this week by Gary Young and his good friend Martin. After a slow start, with some fine tuning of rigs and approach, and with the howling wind and rain of Thursday, they stated getting amongst them. The biggest Carp of the day was the fantastic Mirror above. I got a call around 17.30 to say they had caught a 30lb+ Carp. Arriving with a weighing staff and scales, I was expecting to see one of the bigger Carp which had been caught recently, or indeed the 'missing' 30lb+ Carp from last years catalogue (we had 4 different 30's from Cherry Mere in 2020).

I recognised this lovely Mirror, which went 31-04 on the scales. However it was not until I got back to the house to check did I realise that this is a new 30+ for Cherry Mere. Even assuming there are no other Carp coming through, then this amazing little lake not only contains a great head of Carp but it contains at least 5 over 30lb. Needless to say we were all delighted with this capture and Gary joins the 30+ club on the first time of asking as the 214th member.

We are essentially fully booked until November.. To help save too many people calling hoping to book before then we have been running a banner on the website to this effect. In truth we have two vacancies before then, notably

Callum Dodd has been the star of this week on Cherry Lake. Fishing in Grebe Lodge, on a return visit, with his Grandad Dave Powell, Callum has beat his PB twice. Fishing with our Bio-Spice boilies and our new Toppers, Callum and Dave have so far had 5 Carp whilst losing several more. Callum's biggest Carp, a Common, came in at 33-12 and smashed his previous PB.

On Wednesday evening I got a call to say he had another 30 in the net and would I like to pop round. I did so like a shot. I did not recognise this particular Carp which had a very dark head which contrasted with its body colours. Having studied the catalogues for the last few years, I was very pleased to determine that this 32-12 Mirror is a new thirty for us, as well as an addition to this year's 30's catalogue. Callum's XL 30+ club polo shirt fits him very well and says its a shame that his Grandad does not have one! Dave you will have to come back again! Well done Callum..

We have had 8 Carp caught from Cherry Lake since Monday and they have all been on the Cherry Lake Bio-Spice fishmeal boilie. We have been feeding these fish meals now for a few weeks as the water temperature has crept up. The Carp also like our new Bio-Spice flavoured Toppers which have also accounted for most of these Carp being fished in conjunction with the boilie. I believe Pink is out-pacing the alternative Yellow and White alternative colours.

Gary Humphrey has spent this week staying in the Cottage and also has claimed his 30+ club shirt. On Wednesday morning he caught the biggest Carp of the week when he landed this friendly 34-08 Mirror. This particular fish is obviously hungry and on a pre-spawning munch, as it is the third time she has been out this year. She swam away strongly apparently none the worse for wear! Well done Gary.