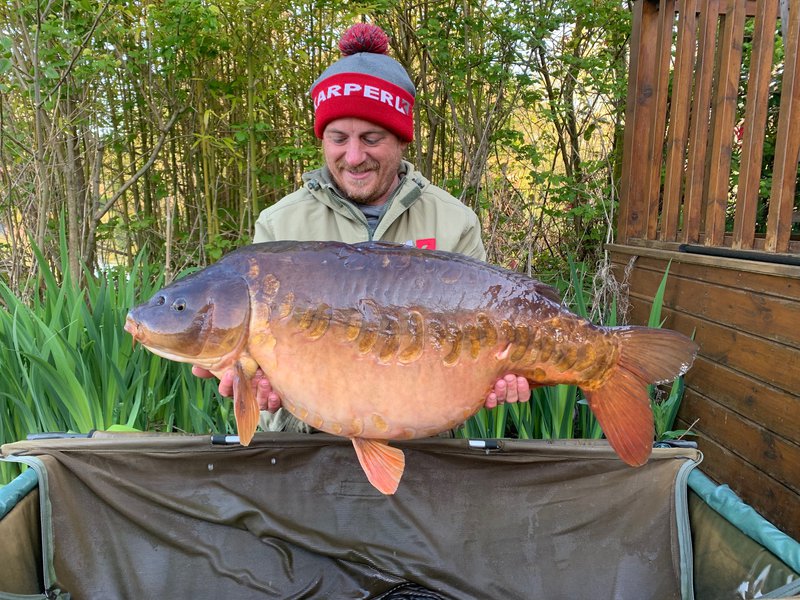 A much better weekend on Cherry Lake following a slow few days last week. The sun coming out I think has helped, although we had two further overnight frosts....in May good grief! All the Cherry Lake anglers have caught, with two anglers reporting PB's. The fishing was relatively slower on the smaller lakes which appear to have been more impacted by the cold than Cherry Lake.

The star of the show this weekend has undoubtedly been Eddie Szyczak who has been fishing from Osprey Lodge during his first visit to Cherry Lake. Eddie, who is closely connected to the Karper bait company (owned by his brother Ben and Chris Madden), and used their baits and clothing throughout!. Some of you will have seen Chris's You Tube videos shot at Cherry Lakes.

Eddie lives in Halifax, and he explained to me that it is much harder 'up North', and the Carp don't grow as big. I now understand why my wife Judith left Bolton..........because the Carp are bigger here.....clearly! Eddie who is obviously (to me at least) a very competent angler, had a UK PB of 23lb upon arrival.

Eddie's first Carp weighed in at a very honest 19-14, His next eight Carp all comfortably passed the 20lb mark with six fish passing his previous PB. Of these 4 were over 30lbs+.Sometimes anglers make Cherry Lake look very easy (which it is not), and on Saturday when Eddie had 8 Carp he certainly did make it look easy. Almost invariably when an angler has a good hit, it is because they fully exploit the feeding spell by fishing the right tactics, in the right location at the right time.

Most of his Carp came from small Karper pop-ups and wafters fished over tight patches of pellet. Almost all of his Carp falling to one spot about 75% away across the lake in around 4-5 feet of water. For whatever reason, the Carp wanted to feed in this area, so Eddie kept returning to it. He smartly kept topping the spot up with pellets and keeping the smell in the area to encourage the Carp to keep coming back.

Eddie's lovely wife Asley first called me mid-morning on Saturday to say that Eddie had a big Common in the net. As always I am delighted to get these calls and swiftly grabbed the new weighing staff and set off for Osprey Lodge. At 35-12 The Common smashed Eddie's PB. This is the first time this Common Carp has been caught this year and has been swiftly entered into our 2021 catalogue. Eddie also became our 201st member of the 30+ club.

Several hours later, Ashley called me again to say he had another big fish. This turned out to be another Common of 33-02. Not a bad brace on your first visit! I had barely left them and had not even made it to Grebe Lodge when Eddie was away again. Mind you he did find time to change his choice of Karper headware! He broke his run of Commons when he had a Mirror of 31-04. A mad few hours!

His biggest, and my favourite fish, came on Sunday morning when he landed 'The Pretty One' at 38-02. I never mind getting a wake up call at 06.30 on a Sunday to see a fish like this. This Carp is absolutely stunning as you can see from the lead photo above. What a Carp to have as your English PB! Brian Round had her at a similar weight a few weeks ago, so I would now like her to 'disappear until the Autumn, when who knows she might go 40+? Extremely well done Eddie.

George Lee fished in the Cottage swim and until Sunday lunch-time he would not have agreed with the thought that Cherry Lake is easy. He was delighted when his rod finally roared off. After a good fish he landed his new PB, a Mirror of 29-12. We used the new Weighing Staff which has been placed in each of the Cherry Lake Lodges and Cottage. These staffs are great for providing an accurate measurement of a Carp's weight. Not only is it easier to hold a big Carp steadier than using a normal weigh bar, but unlike tripods, the sling can be kept over the cradle

Unfortunately for George we could not get the needle to settle on the magic 30lb mark. So we agreed he would have to come back to get one! Well done George.