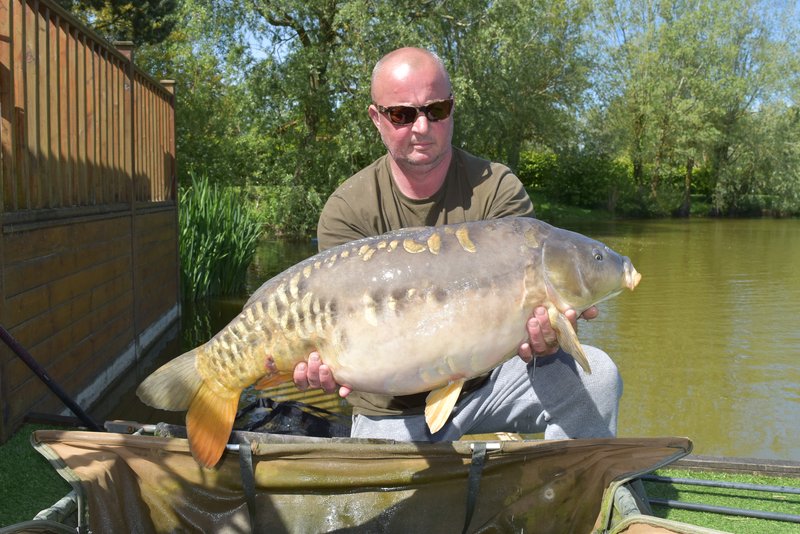 Three of our Cherry Lakes have produced 30lb+ Carp in 2019

Geoff and Pauline Farrand have been regular visitors to Cherry Lakes over the last 5 years and have been staying in Pochard Lodge on Cherry Mere this week. Geoff was already very pleased with his catches when I saw him in the morning, having landed a number of Carp including 4 over 20lb to 26lb. The one below weighed 21lb.

At around 1pm we got a very excited call from Geoff saying he had just caught a very hard fighting Carp of around 31lb. Needless to say, fishery manager Dave and I shot round to see him.....with cameras and weigh scales in hand.

The Carp looked every bit a 30lb+ fish and I expected the fish to possibly be even heavier. Dave carefully weighed the sling and zeroed the scales. The Mirror at 30-02 just broke the magic barrier to set a new lake record for a Mirror Carp for Cherry Mere. Geoff immediately moved from pleased to delighted! As you can see Geoff struggled to hold the Carp to show her off in all her glory.....so befitting of a new lake record we got fishery manager Dave to show her off.

Well done Geoff much deserved! Geoff became the 117th member of the Cherry Lakes 30+ club when he landed his big one.

The lake record for Cherry Mere is held by a Common carp of 32lb which we have strangely not seen for two years. Presuming this fish is still swimming around, then we have at least two over 30lb to go for in the future.