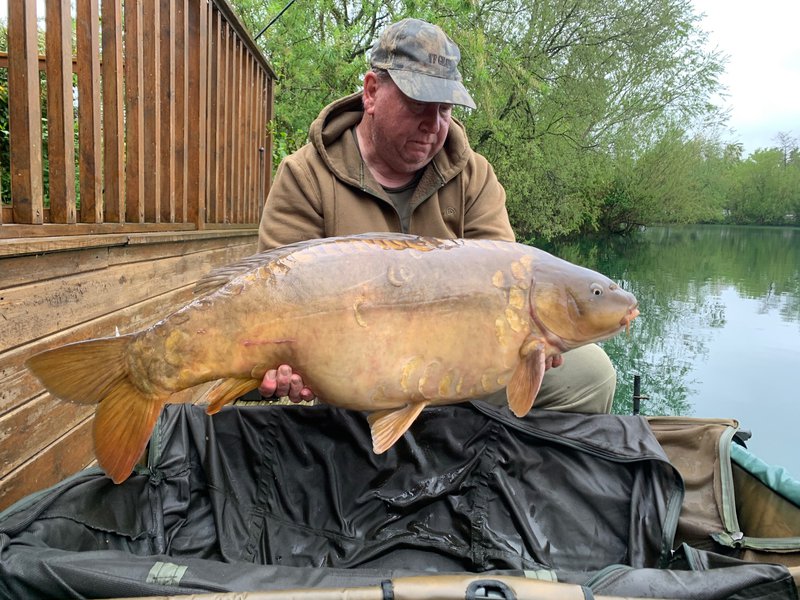 The Thomas's also have a great week on Cherry Mere

Two outstanding catch updates to focus on in this update. I will start with my 'tease' from yesterday's post.

Gary Hutchins became part of the fortunate group of anglers who catch one or more 30's on their first visit. Mind you he did have to wait until Thursday lunchtime until he had his first run. Staying in Osprey Lodge, Gary initially focussed on the near margin and middle parts of the lake where he saw some Carp and found some features he liked. He shifted his focus to further out, at roughly three quarters distance as the Carp showed in increasingly greater number on Thursday.

Fishing our pellets in a PVA bag with a Cherry Lakes Bio-Spice wafter, Gary then had a 18 hour spell that only happens rarely in a Carp fisherman's career.

His first Carp was a lovely Common of 38-08. Looking at in the net, when Gary first called me, the Carp looked huge and he thought he had a 'forty'. Using the new weighing staff, and after carefully lifting it out of the water in the weigh sling, the scales settled at 38-08. Gary was delighted to get off the mark after a 3 day blank! He was also pleased with his 35+ hoody ( member number 211).

There was no question on his next call about him breaking the 40lb barrier with his next Carp. He had just landed 'Dick' the biggest Carp in the lake and the current Cherry Lake record holder (see picture below). At 48-08 this was not her biggest ever weight (Charlie England caught her last October at 49-12). She was however comfortably bigger than the 44-12 weight when caught early last summer. She looks very capable of going 50lb+ in the autumn, particularly if she evades capture until then.

Things amazingly got even better for Gary early on Friday, some 16 hours after the capture of the Common, when he landed 'Ruby' at 41-04. 'Ruby' had also taken her fancy to our Bio-Spice wafters. This is the first time a brace of 40's has been caught in less than 24 hours. Wow! Gary was very fortunate to catch three of the ten biggest Carp in the lake 'on the bounce'.

It is of course impossible to be this selective when you are fishing for unseen Carp. Other than the fact that the conditions were such that the big Carp were feeding (see Aaron Hull's 36-12 Common, and Andrew Durrant's 36-02 Mirror in the last two posts), all I can put this level of 'selection' down to is that the Carp Gods were shinning down (through the rain) on Gary and some great angling from an experienced angler! Very well done Gary!

Father and son team of Gary and Chris Thomas stayed in Pochard Lodge on Cherry Mere and thoroughly enjoyed their few days. In fact it was so hectic they probably went home for a rest!

Unfortunately, what with my age and excitement of the brace of 40's, I cannot remember what their tactics were? I do know they caught from all around the lake and they caught consistently throughout the week.

I am very grateful to Lorraine for sending me a whole series of photos of the twenties. I have selected two of these. The one above shows Chris with his biggest of the week, a 25lb Mirror. Dad Gary had the biggest Carp of the week, a Mirror at 27lb. I have though included a shot of him below with an impressive Common of 24-04.

Well done to both Gary and Chris on a great result.