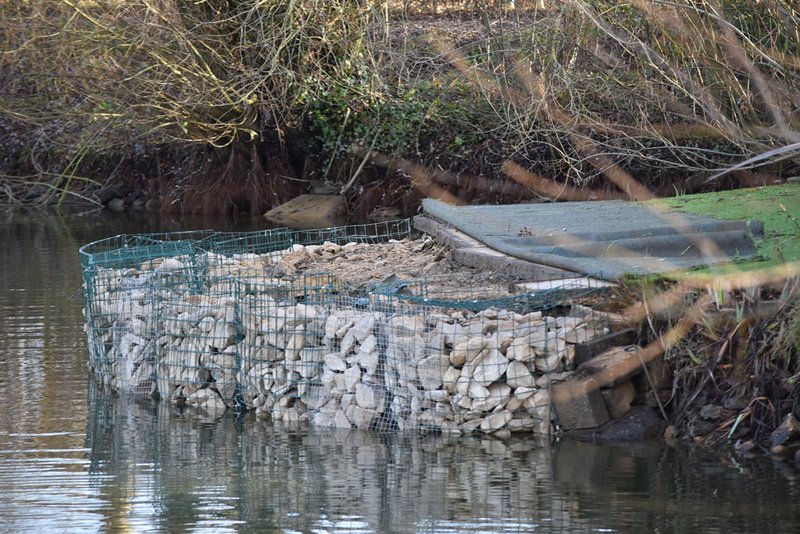 and a new Kingfisher platform!

Firstly we would like to wish you a very Happy Christmas and a happy healthy 2019. I hope you like my favourite seasonal photos (inevitably taken in the snow last year) of Adam Bowyer above on Pochard Lodge (he went onto catch several ‘Snow-Carp) with a very festive jumper; and our Dogs Darwin and Preston below by the Christmas Tree (actually a Wellingtonia) on Cherry Lake. I hope you like them.

We have several Lodges on Cherry Lake unusually available for the period from 28 December over the new year period. So if you fancy getting out of the house and some nice clean country air…..give us a call on 01285 869887

Just to show you that the life of a fishery owner is not all glamour and that fisheries do not look after themselves, I thought I would share with you some of the work we have been doing whilst it has been quiet on the guest front.

Most of our time and heavy work has been spent on Cherry Springs. During the autumn, we noticed that the main fishing area in front of Kingfisher Lodge had been undermined, with the concrete pad on which the astro-turf sits, literally ‘hovering’ in mid-air above the water. This was potentially dangerous, hence the need to shut the lake during November (for approx 8 weeks into mid-January) to undertake the necessary remedial work..

In order to do the work properly we had to lower the water level by approx 2-3 feet. This allowed us to remove part of the old concrete pad, and put in place some 10 Gabions which now form the front rim of the Kingfisher fishing area. This was hard work for the three guys including Dave as we had to fill these Gabions manually as we could not get a digger etc close. ‘Unfortunately my bad back’ made an appearance and all I could do was watch!

As we need these Gabions to settle properly before finishing them and concreting over the top, we have not quite finished yet as you can see in the picture below. It is amazing to think the bottom of these Gabions were fully exposed less than 10 days ago. Since then the water level has already recovered by about a foot. It is not called Cherry Springs for nothing!

With the water level down so low, we had an opportunity to inspect all the banks. What a shock it was to see how much many of the trees opposite the Lodge have also become badly under-mined by bank erosion. Fortunately we rarely get strong north winds, because if we did we would have no doubt have one of these in the lake. To eliminate this risk, we have had to undertake a lot more tree work than anticipated. We will also be planting a lot of scrubs early in the new year as a result!