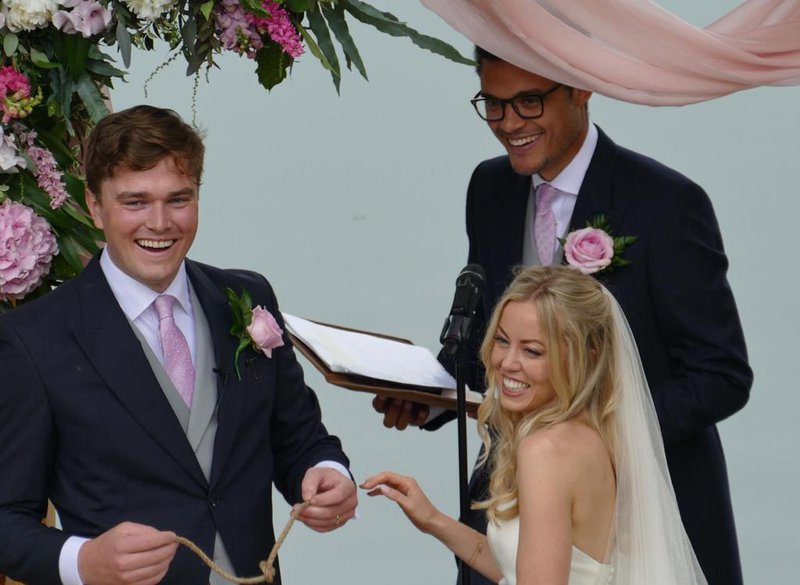 It's been and gone!

My 'Sweetpea' is now a married woman!

Firstly thank you for all the messages of 'good luck and best wishes' from many of our regular guests. It is also clear that regular followers of this blog that many of you want to know how it went. So apologies if you 'tuned in' for reports of big Carp captures as this update is purely a (indulgent) report on Victoria and Ben's wedding.

After such a big build up the Cherry Lakes Wedding of 'The Century' has come and gone and we are now in full clean up mode. The place will soon be looking as good (probably better given all the work we put in) as ever. We should be back to normal from this Friday 30 July.

We will confess to being completely exhausted and a bit washed out. We are also delighted how well it went for Victoria and her husband Ben (it will take me a while, I am sure, to get used to the idea that my beautiful 'little girl' is now a married woman!).

I have included a number of photos , which I have cobbled together from a few friends. The 'formal' wedding photos/video will not be out for a while. I think though they will give you a good feel for the event.

The weather Gods were also amazingly on our side. Up until Thursday we literally melted in heat of 30C, which had it continued would have been unbearable on day. I dread to think what the temperature would have been in the marquee if the sun had continued to beat down. With almost 200 guests the heat would have resulted in a lot more drunk people as well as no doubt some heat exhaustion casualties. However by mid-week it became clear that excessive heat was not going to be the issues but rain with torrential thunderstorms would be. As you can imagine this caused a great deal of anxiety, especially when we got a weather warning for our area for Saturday!

We were so lucky, because other than some early Saturday morning rain and a few spots of rain just before Victoria and I set off for church in an open top vintage Aston Martin car, we somehow missed the rain. This is even more amazing when we know that local towns such as Cirencester, Tetbury and Swindon all had heavy thundery down pours. It was almost as if the clouds nimbly chose to by-pass us and we essentially had a dry wedding (rain not drink......where we were most definitely wet!). The weather was also kinder on Sunday afternoon/evening for the lake party when it was a few degrees warmer and some sunny spells.

Given we were so lucky with the lifting of all Covid restrictions (on 19 July) and also with the weather, we very much believe this wedding was meant to be and is a good omen for the future.

Both Judith and I were proud to be able to play hosts to such a lovely group of people. It was great to get to know Ben's parents and large family. As you would expect some two thirds of the guests were young adults around 30 years of age. It was heart warming to see these young people party so hard over a few days and have such a great time after such a miserable 18 months or so (I believe our young people have had it the toughest during the Covid crisis and it has been their lifestyles which have been most adversely affected by all the restrictions etc).

Without getting too emotional (again), walking my beautiful daughter down the aisle and also watching her getting married by Cherry Lake was one of most prized moments of my life. It also fulfilled one of my life time ambitions to be able to have my daughter get married at home.

I felt such a proud Dad all day, from driving through South Cerney in a classic 1934 Aston Martin with my perfect daughter, to see her having the first dance with her new husband..

My 'Father of the Bride' speech went better than I feared, ...........I only 'blubbered' four times rather than being incoherent throughout it! In fact, I was so worried and concerned about breaking down and losing the ability to speak, that I had a 'hard copy' of my speech, ready for a friend to read out!

It was a little ironic that the Carp put on a great show during the lakeside service, The guests sitting on the house patio had a great view of the Carp leaping and jumping everywhere (the cloudy weather with low pressure being ideal feeding conditions especially after the hot weather). The Carp which were not showing off were feeding hard with big patches of bubbles coming up all around the lake. I suspect a couple of the anglers amongst the guests had their 'ribs prodded' and were told to focus on the proceedings and not on the fish.

I am not sure what the Carp thought about all the swimmers and floating devices during Sunday's lake party......but it was clear that many of our guests enjoyed swimming in the lake.

Talking about the Carp, they obviously enjoyed their week off. Whilst we did not see them spawn (too focussed on the wedding preparations), I have found some recently laid Carp eggs and suspect they did finish spawning during the hot spell.

Judith and I would like to thank everyone who helped us give Victoria and Ben the wedding event they deserved. All our key suppliers, such as Sail and Peg (marquee) and especially our local catering company Relish, did a great job and we cannot speak too highly of them. We also want to thank everyone who helped us (unpaid), including the groomsmen, Ben's parents and fishery manager Dave.

We are now looking forward to getting back to normal and hopefully seeing some new forties and even a 50lb+ carp from Cherry Lake over the next few months.