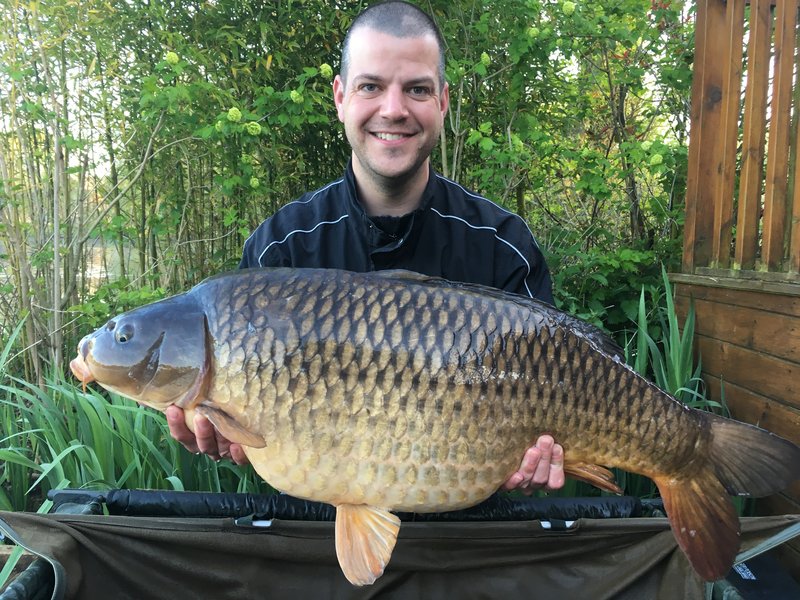 I am very pleased to report James Hine’s new PB is a Cherry Lake Common of 34-12, which he caught earlier today. James has been fishing in Osprey Lodge on Cherry Lake with his good friend Elliot Lee.

When I saw them late yesterday afternoon, the lads were in good spirits despite not having had a bite for 24 hours. With the Cherry Lake Carp cruising all over the lake in the hot-sunshine, they knew the Carp where around and were confident in their location of their baits and rigs. They just needed the Carp to feed!

Around 8pm, the Carp stopped cruising, dropped down in the water and started to feed with three Carp caught in quick succession.  James had a Mirror at 24-06 quickly followed by Elliot with  a classic looking Mirror of 23-05 (see below).

This morning things got even better for James when he landed a cracking 34-12 Common. The successful approach for all three of their fish was a boilie topped with a pink piece of corn. In doing so James has become the latest member of the Cherry Lake 30+ club and is automatically entered into the 30+ club free holiday prize draw. Well done James.

This is a very distinctive Common which I thought I recognised but cannot find in my records for 30+ Carp. It certainly did not come out at above 30lb in 2017 at least according to my records.  I would like to track the progress of this Common but I need your HELP. I would be very grateful if any of our pasts guests could let me know if they have caught this distinctively marked Common. If so when and at what weight. A photo would be great.

This is the sixth different 30lb+ Carp to be caught from Cherry Lake this year. Of these 3 were landed in 2017 as 30′s, but three of them are new 30′s including this 34-12 Common. I am of course delighted with this. If I add these 3 new 30′s just to the 17 different 30′s landed last year then we have at least 20 30′s swimming around in Cherry Lake at the moment including I suspect several above 40lb.