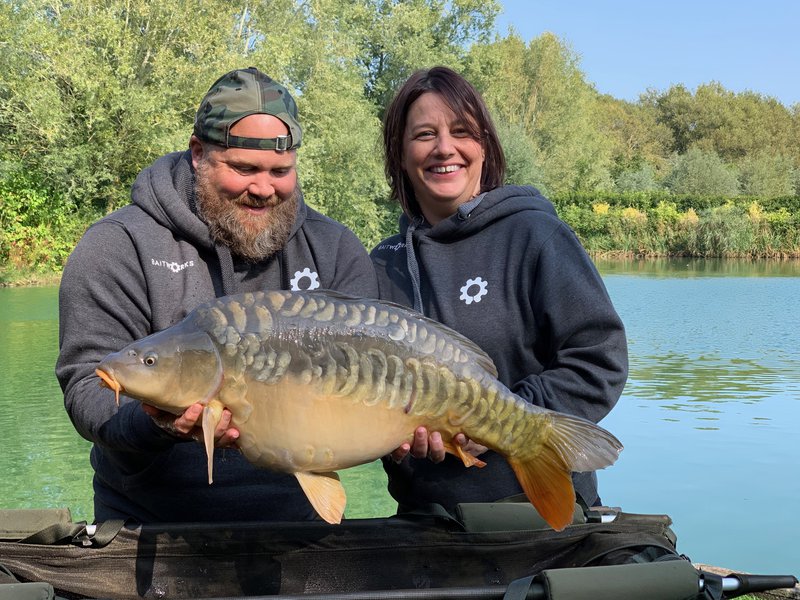 Slow conditions continue.....but a change in the weather is forecast for later this week.

Fishing conditions were largely unchanged over the weekend, with the Indian Summer continuing. Generally all the lakes continued to be hard going with anglers having to 'work at it'. On Cherry Lake, 4 out of 5 anglers caught, sharing 5 Carp to 24lb. Richard Huckstepp in Kingfisher Lodge had a great time and went home happy after his 11 Carp from Cherry Springs.

Jamie Green and Russell Fry in Pochard Lodge were the stars of the weekend. Up until 11am on Sunday they struggled and had only managed two smallish Carp.......and then something changed. The Carp began to show and move around and start to 'bubble'. More importantly their alarms began to sing! Over the next 20 hours they shared 8 Carp, including three twenties plus a new record for Cherry Mere, a 34lb Mirror.

The funny thing about this great last 24 hours, is that when I turned up around 11.00, Michelle actually asked me if there were any fish in the lake as it was so slow! We joked later that I must have gone back and pressed the 'fish feed on' button!

Jamie Green claimed the Lions share of the bigger Carp, landing a 22lb Mirror (pictured with his wife Michelle in the lead photo above), a 26lb Mirror (pictured below) as well as the 34lb Mirror pictured above. The big Mirror was last caught by Daniel Ward at 33-08 in early July.

Russell had to wait to get amongst the twenties. During the early hours of Monday morning he did.....with this impressive 26lb Mirror above.

And just to show that it is not all about the big Carp, how about this 13lb Mirror below. Absolutely wonderful!

Well done to both Jamie and Russell.