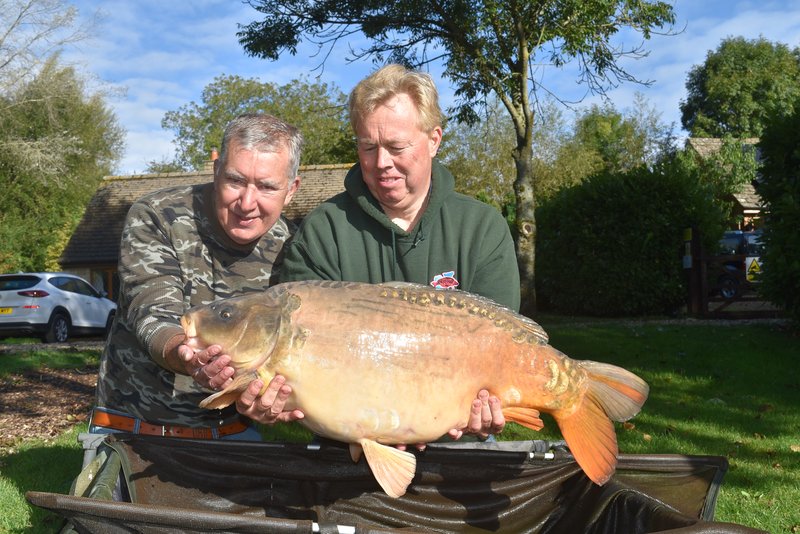 John and Peter Davies 'do the Cottage'

We have had some big Carp being caught from Cherry Lake this week, and for this update I will focus on the exploits of the Davies brothers. I will wait until later this week to do my normal update as it is only Thursday!

The Davies family are just finishing their second extended stay in Cherry Lake Cottage. John Davies and his wife Jacqueline live in Atlanta in the USA, and once a year choose to spend some time in England with John's brother Peter and Mum Winifred. They choose to spend much of their time in England at Cherry Lakes. I am delighted to say they have already re-booked for next year and you can see why.

As John and Peter are both retired they have a more relaxed approach to their fishing. They choose to fish mainly mornings and the occasional full day, and effectively rested the swim for the rest of the time. This is often a very successful approach as the Carp frequently navigate themselves to the quieter water with no lines in.

Over the course of their stay they have shared 11 Carp between them. Of these an amazing 5 were over 30lbs, four of which are photographed here. As neither John or Peter feel strong enough to 'pose' with a big Carp, the 5th thirty (a Ghost Mirror) was simply photographed in the cradle as neither Dave or I could be reached.. This is the reason why the rest of the photos have either Dave or myself holding the fish.

John and Peter like to keep their fishing straight-forward with all the Carp being caught on our krill boilies. They principally fed boilies throughout their stay, scattering them around and then casting to fancied spots in their swim. John had the lions share of the Carp and caught 8 of the 11 Carp caught between them. It always seems strange how this happen as each day he gave Peter the choice of sides and they used the same tactics and rigs.....sometimes fishing is not fair!

Of John's 8 carp, 4 were over 30lb including the 30-04 Mirror held by fishery manager Dave (last photo below) and a 30-06 Ghost Mirror (photographed in the sling). He also landed the 'Scruff' Common at 38-04 pictured above. This impressive Common was last caught by Leighton Cockcroft in early July at 35-03. Another Carp showing good weight gain.

John's last 30+ Carp was a lovely Mirror of 35-04, pictured above. A beauty which is even more impressive in the flesh. This Carp was last caught by Stephen Martin in June at 34-01. After four thirties to John, we were all feeling very sorry for Peter who up to this morning had just landed a couple of Carp of 26-10 and 23-12. I was delighted to hear a shout of 'got one' and to turn around to see Peter with his rod bent. After a good fight it was good to see a big Ghost Carp slip into the net. The Ghost Mirror weighed in at 37-02, a massive increase in weight since she was caught by Jamie Vowles in May at 32-08. This lovely Carp, which is pictured in the lead photo above as well as immediately below, has obviously been feeding hard and must love pellets as well as Krill boilies! Peter's Ghostie was also his new PB.

Well done to both John and Peter, who enjoyed catching some real crackers as well as becoming respectively the 148 and 149th members of the Cherry Lakes 30+ club. See you next year.