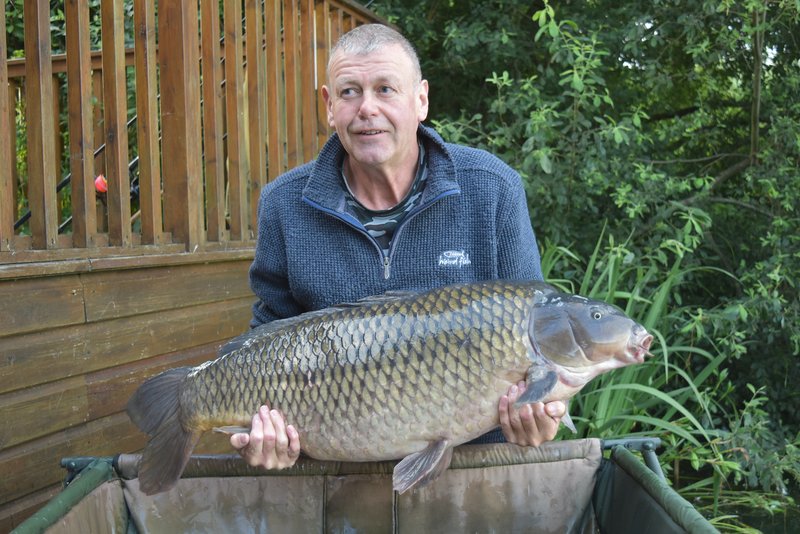 The fishing across Cherry Lakes this weekend has been relatively slow across all of our lakes over the last few days. It is hard to know why on the smaller lakes given that air pressure is not unduly high. There is something about the conditions which is encouraging the Carp to be visible etc but not feeding even in the cooler hours. The excuse on Cherry Lakes being compounded by the fact that they are recovering from last weekend's heavy spawning.

I have noticed over the years, and particularly across the winter, that when fishing is slow with little activity, that when a Carp does get caught it is often one of the big ones. Well this 'phenomenon' happened again early this Sunday morning when John Carrington landed the first Carp of the weekend from Heron Lodge.

John Carrington arrived on Friday for his first holiday visit to Cherry Lake with his wife Lesley. His very first run came at 05.30 this morning (Sunday) and after a steady take and long tough fight he landed the big male Common known as 'The Patch' at 41-08. Unfortunately I was not around to see this magnificent Carp, but fortunately fishery manager Dave Bowen was able to respond to Lesley's call. When you look at the length of this Carp and how solid he is, it is not surprising it put up a really good fight.

John fished a fishmeal boilie in a PVA bag of crushed up Cherry Lake Bio-Krill boilies at about 40 yards. 'The Patch' was a new UK PB for John and by catching this impressive Carp he became the 130th member of the Cherry Lake 30+ club. Better still he becomes only the 4th proud owner of the 40+ club fleece. Well done John.

'The Patch' is the fourth different Carp caught from Cherry Lake and the 3rd different one since last October. Mike Houghton caught a Mirror of 40-04 on June 15 See picture above). The bigger Mirror called 'Dick' was caught at 44lb last October (older carp anglers can quickly see why we called it 'Dick'........after the original carp record holder who landed the 44lb Redmire Carp in September 1952). I had been hoping that 'Dick' would have been caught before the Carp spawned last weekend. As a female Carp it would have been a lot heavier than 44lb!

'The Patch' Common is the 25th different Carp out in 2019 over 30lb+. As many guests know we have photos of all our recent big Carp captures on the wall in reception. It was very interesting to see all of this years 30+ Carp when I updated it last week. What was more interesting was how many big Carp (12) over 30lb that were caught last year but have not yet been caught this year. As well as 'Dick' (pictured below with Malcolm Dix), we have not seen 'The Peach' as well as several of last years bigger 30's. I think my estimate of around 40 Carp over 30lb+ is a very realistic one. Time will tell!