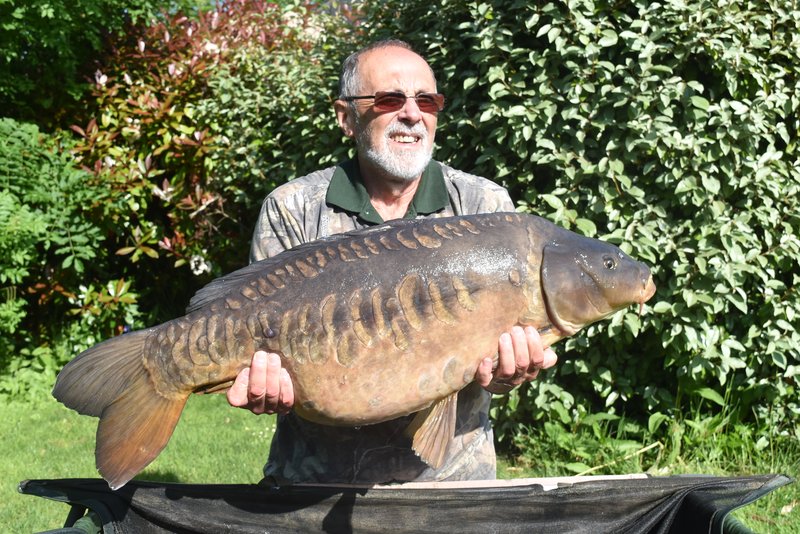 Ken O'Connor and his wife Rosemary are very regular visitors to Cherry Lake. As they are retired they are able to come at short notice when we have a late vacancy. Heron Lodge is also Ken's favourite Lodge, which is also helpful as for some reason it is often the last Lodge to sell.

Ken arrived on Monday following an excellent week on Cherry Lake when some 30 Carp were caught including 7 over 30lb. I was very optimistic that the Carp would continue to feed hard and I have been on high alert expecting to see one of the 'big girls' in a landing net well over 40lb! So far this week it has not gone to plan. The Carp have become much more interested in sun-bathing and have started to group up which is fairly typical pre-spawning behaviour. So far since Monday we have had 7 Cherry Lake Carp landed and several lost, with Ken's 33lb Mirror (above and below) backed up by a 29lb 'Italian' being the two biggest. Ken has now recorded 8 different 30lb Carp from Cherry Lake and his third since December. Well done Ken.

Our running total of different Carp from Cherry Lake in 2019 is now 12. This particular Carp was caught last August by Craig Salvin at 30-04.

Unfortunately the weather forecast is for a gradual cooling, so I do not think the Cherry Lake Carp will spawn for at least the next two weeks. As a fishery manager I do not like spawning time. Whilst I do not like the Carp getting increasingly moody and unpredictable (from a guest's perspective), I really hate it when the weather is unsettled, as the act of warming and then cooling, frustrates the fish and stresses them. Where the weather is warm and settled the Carp are able to spawn effectively . They also recover quickly and soon get on the feed. As a result Carp mortality is normally low. In other years when it is well into June or even July before the Carp spawn, mortality can be higher. Needless to say I am hoping for a nice warm spell of weather in June.

Jane and Steve King have previously visited Cherry Lakes twice before and have enjoyed successful stays in Egret Lodge on Cherry Pool. This year they thought they would test their angling skills and try to extend their personal bests by fishing Cherry Mere from Pochard Lodge.

I am delighted to say that they have both achieved their goals this week and set new PB's. Steve landed a Mirror Carp of just over 20lb to set his new mark. Jane went even better when she landed the 25lb Mirror pictured below. She was clearly very excited when she called me to say she had caught it. Unfortunately I was not around and so could not help her to display the Carp to show it off in all its glory!