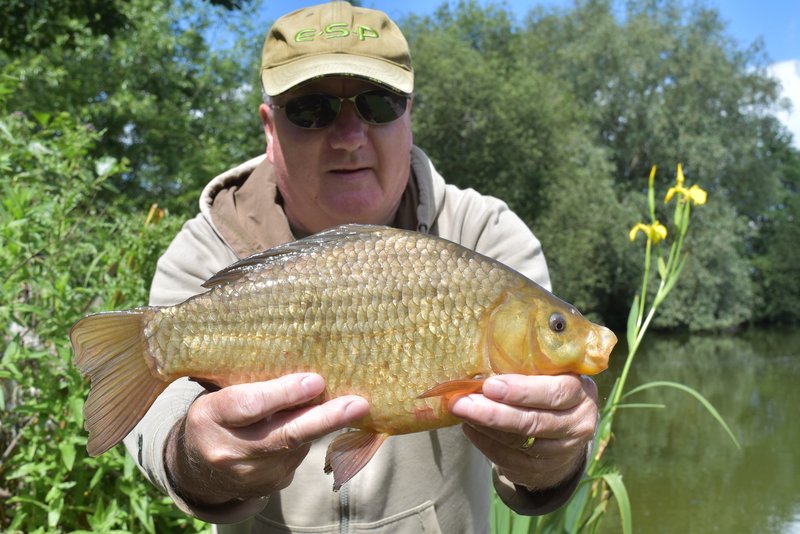 ....I fall foul of the curse of the commentator!

It has been a relatively quiet few days on Cherry Lake with just two Carp (a 29-06 and 26-08 ) reported. My instinct tells me that the Carp fishing will be slow until the Carp finally spawn which I expect will be by the end of this week. So I thought I would concentrate this update on Kevin Lane's exploits on Cherry Springs.

I mentioned in my last update that Kevin Lane had been staying in Kingfisher Lodge with his wife Janet and that he had been float fishing close to the over-hanging trees whilst waiting for the Carp rods to go off, and I made the following comments...........

'As it has been a little slow, Kevin has been float fishing close to the right hand side trees. As well as having a 10lb Mirror which gave him a good run around, he has landed several Roach to 1-08. Personally I am delighted to see the occasional Roach being caught and clearly doing well'.

'I have stocked Cherry Springs with about 100 each of Tench, Roach and Crucian Carp. Largely to give our guests something else to fish for other than Carp and the ubiquitous Perch. The Tench are now starting to pick up small Carp baits and coming out around 2.5-3lb. The Roach and Crucian's are however rarely seen. I suspect both of these species are doing well, but do not regularly inhabit the area near the fishing platform of Kingfisher Lodge, and as such they are not fished for. Crucian's in particular are well known for finding small areas out of the way of the 'bullying' Carp'.

As you can see from the photos I have fallen foul of the 'curse of the commentator', as no sooner had I published the last article about the Crucian Carp disappearing and being rarely caught, then Kevin quickly went onto prove me wrong by catching 5 of them all between 2lb - 2-08lb! The lead photo as well as the one below show that these young fish are doing very well and look in great condition.If you are planning to visit Cherry Springs, as Kevin has clearly this week, it is worth packing your float fishing gear!

Kevin's successful tactics was to float fish two grains of sweetcorn just off an over-hanging tree to the right of the Kingfisher fishing platform. The fishing was slow but worthwhile. As well as the Crucian and Roach he also landed several Carp to 10lb and Tench to 2-08. Given the Carp fishing was a little slow for Cherry Springs, he thoroughly enjoyed himself catching some of these other lovely fish. Well done Kevin