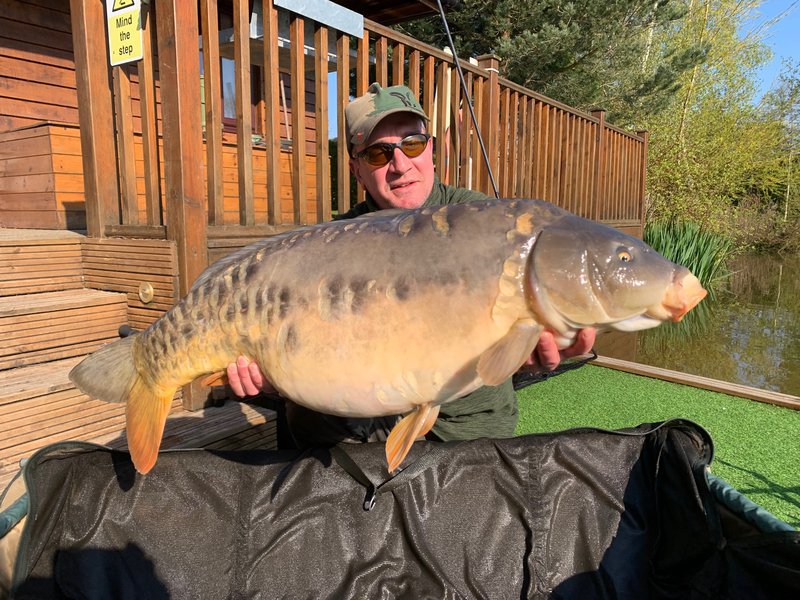 A disappointing week across the fishery with all lakes slowing down during a period when the 'text books' said they should be going on the feed. I have been scratching my head as to why? Our guest's Carl Booth's comment that last week the frosty nights were offset by the warm sunny days with the Carp mainly feeding in the afternoon and evening, whereas for much of this week, cold nights have been followed by cold days. Perhaps it could be as simple as that!

The week started well for returning guests Carl Booth and Clive Evans in Grebe Lodge. They had three crackers within 24 hours of starting and then it died for the rest of their stay.

Clive had a 28lb Mirror quickly, followed by this 31-02 heavily scaled Mirror, pictured above, in the early hours of Tuesday morning. Whilst not a great photo (it is difficult at night), I can see enough of the fish on both sides to be confident that it is both a further addition to this years 30's catalogue as well as being a new thirty for us. I think this is a Common Carp without all of its scales rather than a heavily scaled Mirror. What do you think?

In catching this fish, Clive became the 199th member of the Cherry Lake 30+ club.

Monday certainly started with a bang for Carl Booth. Within two hours of starting Carl landed this distinctive 37-08 Common above. In doing so he earnt a 35+ Hoody having already qualified for a 30+ shirt on his last visit in 2019. I think the successful bait was a small pink pop-up over pellets. My memory seems to be getting poorer by the day.....so I would not swear on the bible about this!

This is a very distinctive fish which is familiar to both Dave and I. We both went through our 2020 catalogue twice looking for it to no avail, making it the third 30+ Carp of the year which did not feature last year but was in 2019's catalogue. It appears that some Carp are more likely to be caught in the Spring and then disappear for the year. The fact that we were locked down for most of last Spring/early Summer, might account for why these 'missing 30s' did not get caught last year (at least as far as our records show).

Amazingly this Carp was caught at 31-08 in June 2019 by Carl's namesake, Jason Booth, who I don't think is a family relation! It was only when I was 'researching' for this update did I notice this spooky coincidence.

Over the last 5 years, since we started the Cherry Lakes 30+ club, around 90% of the 30's caught by anglers have been from Cherry Lake. I find it almost ironic that Cherry Mere claimed the 'honour' of producing the 200th 30, when Lee Clarke caught this fantastic Mirror of 33-04 on Thursday afternoon. His Dad Peter, was staying with lee in Pochard Lodge, also landed a 25lb Mirror on Thursday when the lake started to produce after a slow week. Fortunately because of a good Thursday, they both went home very happy, and especially lee with his prized polo shirt!

I hate to finish this update on a negative note. We recently pulled out a dead Ghost Mirror Carp of around 16-18lb. The Carp looked normal except for a big gash on along one of it's cheeks from it's mouth. It gave the impression of having been tethered and 'ripped' itself free. This made us think about what might have gone on, and also to understand why other fisheries have banned plastic baits. In short a cracked off rig (for whatever reason) is always a live rig when it has plastic on. Baited rigs become inactive as the hook bait either drops off or goes off. Given there are plenty of alternatives to pop up Corn (such as Toppers), which is the most common plastic bait in use here at Cherry Lakes, we have taken the decision to ban all plastic baits with immediate effect. I am researching to see if I can source some edible alternatives. Sorry but the health and welfare of the Carp comes first.