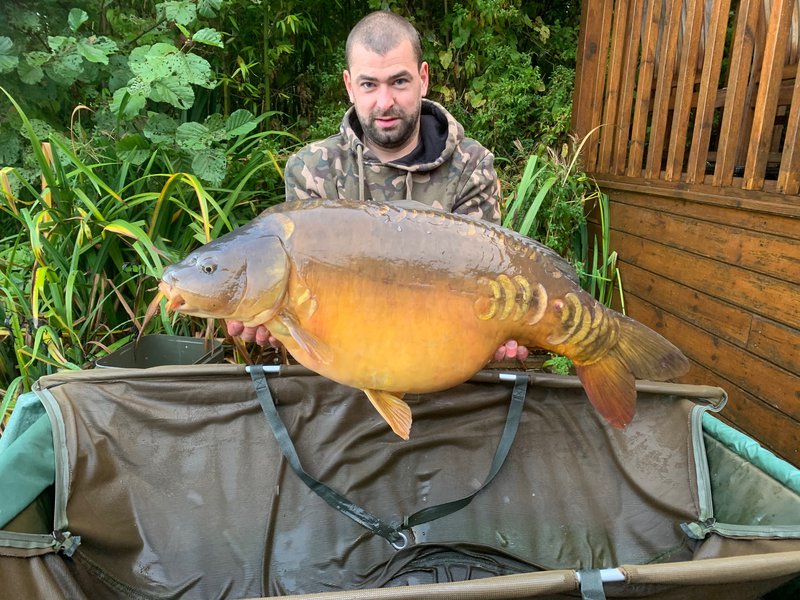 Phil Chalkey lands the third different 30+ Carp from Cherry Mere of the year.

I was pleased when it started raining earlier this week, not least because the river and lakes are very low, but with the pressure dropping it would hopefully encourage more active feeding from the Carp. Well it sort of worked.........

The fishing on Cherry Lake has continued to be difficult for most anglers. Until Wednesday when the pressure dropped, the Carp were not very noticable. Not really surprising given we had ice on the cars on Monday morning. However since Wednesday the Carp have been fizzing as well as showing, but largely reluctant to pick up anglers baits.

The exception to this rule was Lee Rowe. Lee was fishing Cherry Lake for the second time and staying in Osprey Lodge.

Lee's first Carp came in heavy rain on Wednesday late afternoon. A 26lb Mirror was a good start. I then got a call at 11pm saying that a big Carp had picked up Lee's snow-man bait positioned about three quarters of the way out. The Carp turned out to be the very friendly fish known as Pac-man, which featured in my 25 September update. This time the Carp weighed in bang-on 35lb. A new PB for Lee.

Lee's bait boat was playing up, so after a quick cup of tea he decided to simply re-cast this rod with a single pop up......classic 'pub-chuck' style. You have guessed what is coming, this rod rattled off less than three hours later. After a good fight, Lee beat his PB for the second time, this time with a 35-12 Mirror pictured above. The funny thing about this fish, is that I had caught both of Lee's 35's in June, which was the last time I think this good looking Mirror was out (also at 35-12).

Lee became the 189th member of the Cherry Lake 30+ Carp and was pleased with his 35+ Hoody.

Lee's last Carp came during Thursday. At 28lb, I thought this Carp was a really appealing. I hope you do too. See the photo immediately above.

Wednesday night was a busy one for me, as I had three calls between 23.00 and 02.15. The call around mid-night came from Phil Chalkley on Cherry Mere. After a slow start, Cherry Mere switched on on Wednesday, culminating for them with this 32-04 Mirror just before midnight. I was reluctant to retain this Carp for so long, so we have had to make do with some night photos. They were however good enough to confirm that this is the third different Carp over 30lb from Cherry Mere over the last month or so. Phil becoming the 190th club member.

Phil and his dad Michael, who were on their first visit to Cherry Lakes, caught some 15 Carp between them, most of which including the thirty came on our Cherry Lakes Bio-fruit boilies. They both caught a Ghostie including this 22lb Ghost Common to Phil below. They enjoyed it so much, they have already re-booked for next year.

Dave Hall and his lovely wife Joanne returned for one of their regular trips to Egret Lodge on Cherry Pool. Dave who loves his bread fishing under a 'Polaris' float, caught all week including a Crucian of 4lb. He apologised when he say my disappointed face when he told me he had not taken a photo! He has promised to do so next time!

Well done to Lee, Phil and Dave on some great captures.