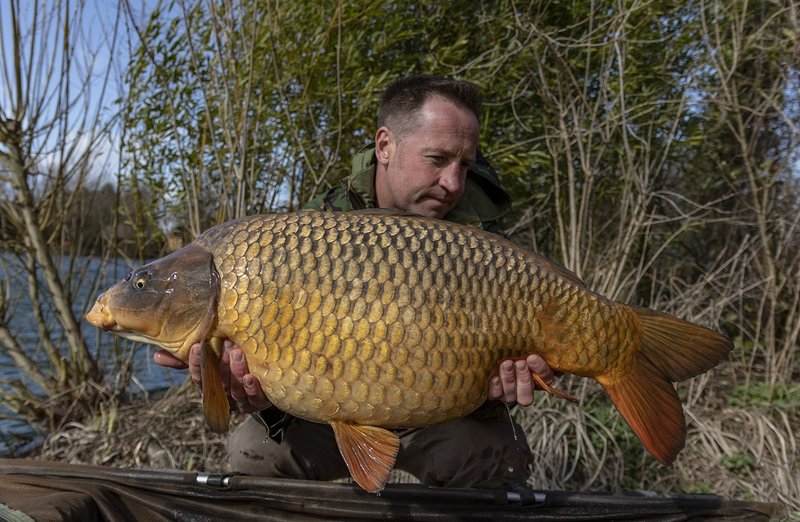 Leon Sprague lands the first 30 of 2019 from Cherry Lake

I am not going to get a day job working in either Technology or Photography as it has taken me all week to work out how to use the photos which Leon Sprague sent to me last Sunday.

Those of you who follow Cherry Lakes on Facebook will have seen that Leon Sprague caught several great looking Carp last weekend including the first 30+ of the year. All I was able to post was a couple of interesting shots of the Carp in the net, one of which is included below.

Weather conditions over last weekend at Cherry Lake can best be described as wild. So much for me recently moaning about a lack of wind! Gale force winds have certainly turned the water over, with many of the Carp now clearly on the move. We have been fairly quiet on Cherry Lake as you would expect of early March which means it takes a while to build up a full picture of where the Carp are and how they are feeding.

Leon Sprague stayed in Osprey Lodge last weekend with his lovely wife Vicki on their first trip to Cherry Lake. Leon is clearly a top class angler and certainly showed me how it is done! Leon chose to fish the middle areas of the lake and spoded out a mix of hemp, sweetcorn and a few crushed boilies onto a couple of interesting features.

Leon  joined the Cherry Lake 30+ club as our 115th member and the first new one of 2019, at the first time of asking, when he caught this fantastic Ghost Common of 32-13 below. This was a PB for a Ghostie for Leon.  He also caught two other stunning Mirrors of 23lb+ and 21lb+. The pictures which were taken by his wife Vicki also show what great condition all these Carp are in and they seem to have come through the winter very well. Leon described them as all being ‘mint’. The 21lb Mirror will be a really impressive big Carp one day

The Ghost Common was caught last March by last years prize draw winner Dan Walden at 31-04. It is good to see that this Carp which I think is a male one, is up almost two pounds in weight.