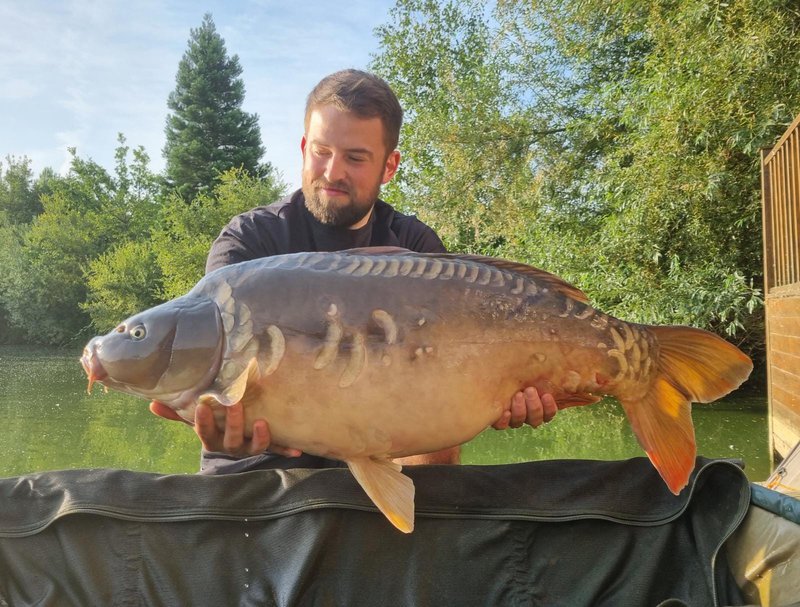 Luke Goddard lands a brace of 30's from Cherry Mere

Luke and Adam Fairclough share 40 Carp from Cherry Mere despite the heat!

Along with most of the UK we have been sweltering in the heat. My heart went out to all of our guests who where here during the brutal heat over the last week. As I write conditions are much better and looking out of the office window I can see a lot of happy Carp still cruising around as well as obviously feeding. What they are feeding on though is a different question as the fishing on Cherry Lake has been slow.

Most anglers over the last week or so have managed few, but with the exception of two low-30's caught in the early hours of the morning, (sorry no photos as we want the Carp to be put back quickly given the high temperature of the water), most of the Carp were smaller and probably mostly males. Gary Owen caught this 28-08 Common last night (pictured last photo below) after finally getting a pick up in a silty area where the Carp had been regularly fizzing and bubbling.

We sneaked away for a golfing trip last weekend with my good friend Chris Hughes stepping in for both Dave, who was also on a well earned break, and myself. Chris and several of the anglers all reported to me that some of the Carp had been spawning.

I very much hope it was the 'bigger girls' finally getting down to business. Over the last two years I think they have been reluctant to spawn (in fact I think some of the Carp did not last year and successfully re-absorbed their eggs). Maybe the water got so hot that even these bigger females could not resist the urge. I am not sure the heat worked the same way in Humans!!

We continue to have several vacancies in August on Cherry Lake . First come first served 01285 869887

I am pleased to say that the smaller lakes have continued to produce well in the heat. Very much the stars have been Luke Goddard and Adam Fairclough who are currently staying in Pochard Lodge on Cherry Mere.

The arrived on Monday in the height of the oppressive heat and I though they might struggle. Again what do I know! By Tuesday morning they had already landed 6 Carp, when Luke landed this absolutely fantastic Mirror Carp at 35lb, pictured in the lead photo above. By this morning (Friday) they had landed an incredible 40 Carp!

Yesterday (Thursday) Adam sent me some more photos confirming they had gone out for a few hours to have a rest! They had somehow also been able to catch some of the bigger fish. Luke followed up his earlier thirty with another one. An even more attractive Mirror of 31-08. A fantastic brace of 30s.

Adam had also been getting into the action and had landed 5 x 20's to 27lb. They still have until Monday to go! No wonder they are both very happy!

This is the first time this year that I seen photos of these two Carp. It is probably their first time out, but I know I have missed at least two reported captures around the 30lb mark. Luke's first Carp has shown good growth of almost 4lb since last year when it was caught at 31-02. The 31-08 Mirror was caught at a similar weight.

I never cease to be amazed by this little lake. Cherry Mere is absolutely stuffed with Carp, there are far too many as they keep reproducing, and yet the bigger carp are still growing and look in good condition. This is obviously in part due to our on-going investment in high quality feed as well as running the oxygenators 24/7.

We did net this lake last winter, but were spectacularly unsuccessful in getting the smaller Carp (anything under 7lb). so, I would be very grateful if any/all of our future guests bring a float rod or two and catch some of these for us. Good fun whilst you wait for a normal run, and helpful to us.

Regulars Mark and Sue Worsley returned to Kingfisher Lodge this week. He caught 9 Carp to date including this lovely Mirror of 26-08 pictured above and another Mirror of 23-08 . Very nice Mark and see you both next year.