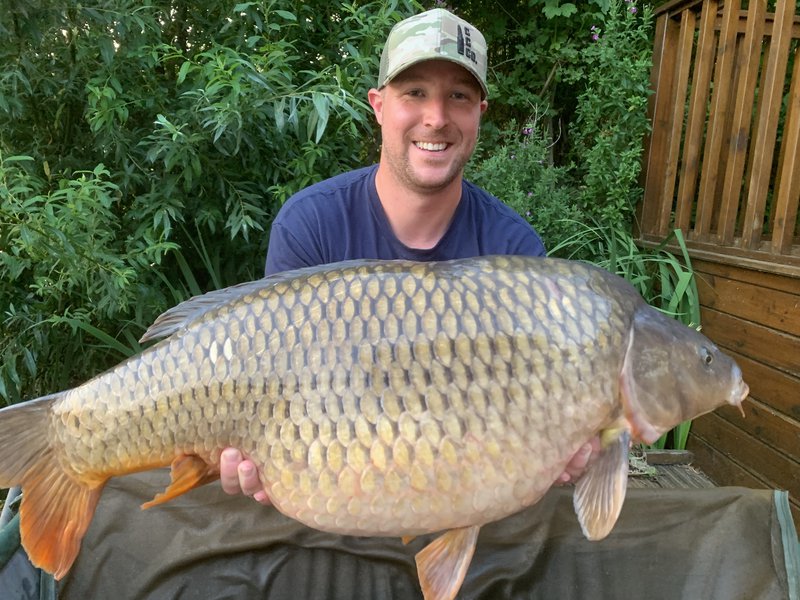 Tom Nixon-Taylor finishes with 19 Carp including 4 over 30lb+

As forecast in my last update Tom Nixon-Taylor kept producing the goods, but I am going to start this update with a report from another regular Martin Eagle.

Martin and his lovely wife Suzanne have been visiting Cherry Lakes for the last six years since 2015. This time they chose to have a week in Grebe Lodge on Cherry Lake. Martin caught steadily landing 11 Carp during his stay.

Martin's view when he visits Cherry Lakes is that they are on holiday. As a result they frequently go out for long walks, as well as often choosing to reel in his rods over-night and early morning. It is not fishing at all costs. The impact of which is that he often rests his swim and as a result the Carp often move in.

On Wednesday he had a mad twenty minutes. He had a little lie in and did not get his rods out until around 08.30 by which time he had positioned his 20mm boilie bottom baits in his target spots. Within an hour or so at 09.45 he had his first take, quickly followed by a second run whilst he was playing the first one. Long story short, he managed to get both Carp into the same net, by which time help arrived in the form of Tom from Osprey (both Dave and I unusually were not on site).

Just as Martin was putting back the first of these (Tom had managed to split them up between two landing nets), Martin's third rod screamed off. the result being a Mirror of 22lb. Over 80lb+ of Carp in about twenty minutes. Not bad indeed!

Martin joined the 30+ club (at last he said) with the bigger Carp (see below), which was also our 31st different Carp over 30lb+ of 2020. This particular Carp was caught in the Spring of last year by Danny Taylor at a similar weight (30-02).

Tom Nixon-Taylor, as well as being on hand as a Carp helper, continued to catch Carp regularly throughout his week's stay in Osprey Lodge. The highlight was of course the 42-12 Common known as 'The Patch' which he caught last Saturday (see last picture below). He went onto catch 19 Carp including an amazing 3 thirties. His first thirty was the 30-02 near Fully Scaled Mirror (see last news update), which was followed by a 30-02 Ghost Common pictured below (which was down in weight from its last capture at 32lb+) and a 33-08 Mirror pictured in the lead photo above (also down in weight).

I have been convinced over the last six weeks that the big Carp did not spawn along with the other Carp in late May. Whilst I am still seeing one or two Carp which look like they could be carrying spawn, we are also catching a few of the bigger Carp down in weight, including the two of those pictured above. I am now wondering if they have spawned and I somehow missed it in May, and what we have been seeing is heavy Carp rather than Carp carrying spawn late into the year? I am certainly less convinced than I was about this? Time will tell.