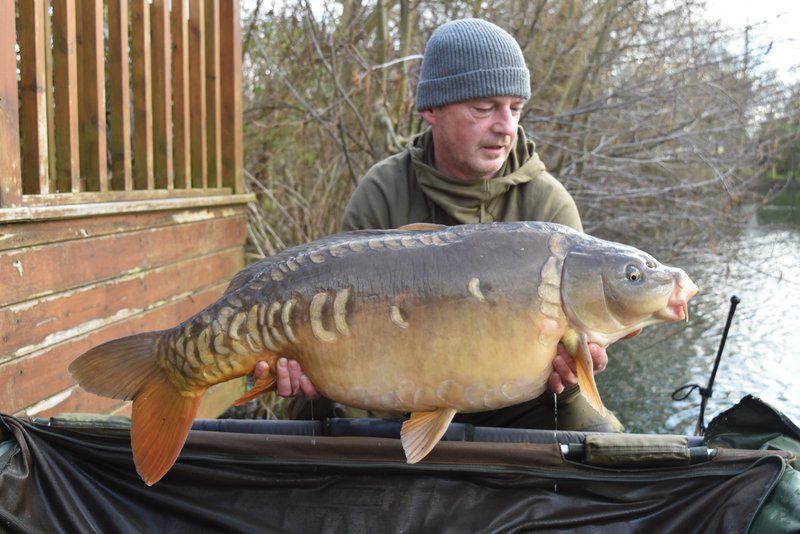 Now we are officially in Spring it has felt like winter over the last week here at Cherry Lakes. The water temperature has dropped back to closer to 7C as a result of some cold winds and clear nights (cold but no frosts). Let's hope it does not fall any further as 7C is a key level for the Carp to be active.

With any fall in temperature, especially at these levels, the Carp tend to 'complain' and are much more reluctant to feed. This has certainly proved to be the case this weekend, even on Cherry Springs and Mere where the anglers only reported one Carp! Cherry Lake however did offer up several Carp much to my surprise.

Martin Hurst was on his second visit to Cherry Lake, having visited last August. He struggled up until Sunday afternoon in Grebe Lodge in difficult conditions. I was somewhat surprised and very pleased to receive his call around 16.00, to hear him say that he had just landed a good Mirror and would I like to come round. Too right I did!

As you can see from the lead photo above and below, Martin had caught a lovely Mirror. At 30-04 it meant that Martin joined the 30+ club as our 166th member. Martin used Mainline Active-8 mixed with The Cell boiles to entice this stunning Carp which looked brand new. He positioned his baits in an 8ft channel.

Even better news is that this Carp is a brand new thirty for us and another fish (fingers crossed) that has the frame to be much bigger in the future. As I have commented before, most of our Carp have over-wintered well and are continuing to grow. So far in 2020 to the 1st March, Cherry Lake anglers have landed 14 different Carp over 30lb. Of these 4 are new 30's........which are obviously some of our previously bigger 20's coming through.

Martin continued to surprise me, as he followed up the Mirror with a 23-08 Common, just a few hours later at around 20-00. Same tactics and location doing the business again. A very impressive brace given the conditions. Well done Martin and wear the 'shirt' with pride!

Aaron Bailey stayed in Osprey Lodge on his first visit to Cherry Lake. He also did very well to land a 24-01 Common on Saturday night around 19.00. He fished Cell boilies approx two thirds the way across. A very impressive result on his first visit. Well done Aaron.

It is interesting to note that two of this weekends Carp have been caught in the first few hours of darkness and makes me wonder if the preferred feeding time is shifting more to 15-20.00 rather than the 11-15.00 which has been the preferred time through much of the winter?