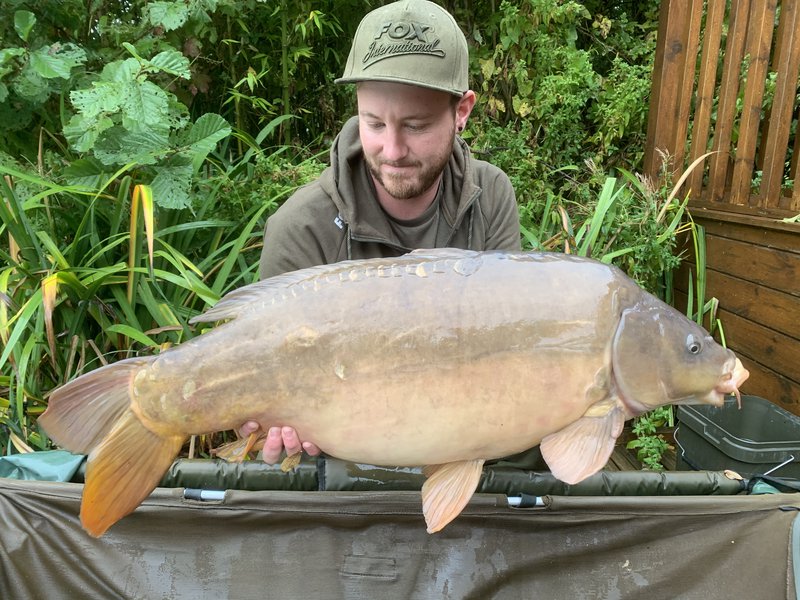 Nathan Lynch proves it is not too wet for the Carp!

I felt sorry for all this weekends guests as they had to endure a 'Monsoon' for most of their stay. It seemed like it rained for 48 hours solid! At least their 'ultimate Bivvy's' (The Lodges) kept them warm and dry! Unlike the poor guest in the Cottage who had to give up for the weekend as his inflatable new bivvy deflated in the rain! Still they enjoyed the log fire and they have still got 4 days to go!

The fishing was just about OK. Typically with heavy rain at this time of the year the fishing can be slow. I think this is due to the cooling effect of the rain on the water on the lake. This is especially the case if the River Churn goes into flood (as it has done this weekend) because this recharges and raises the water table quickly with cold water which increases the level of the lakes.

The anglers on Cherry Mere and Cherry Pool were so happy with their weekend experience that they have both re-booked for next year. Mark Davies, who caught well in the rain, managed 8 Carp in quick succession after the rain stopped yesterday afternoon.

First timer, Nathan Lynch, was this weekends star on Cherry Lake. Although it is nice to report that all the Lodge anglers caught at least one this weekend.

Nathan fished in Osprey Lodge. On arrival (as he was late he had to make do with a check in from myself), I advised him to fish in the gulley's no more than half distance as this is where the Carp had been showing most. He chose to fish our Bio-Spice wafters over a mix of hemp and crushed fish meal boilies.

His first Carp came on Saturday morning when he ;landed this 31-10 Mirror in the main picture above. At the time I thought it was one of the 30's which had been caught earlier this year by Charlie England. However on examination, I am pleased to say that this Carp is a new thirty for us and our 45th different 30+ of the year. Nathan became our 190th 30+ club member.

Around 20.00 on Saturday evening with the rain lashing down, I received another call from Nathan to say he had another 30 in the net. As well as arriving with me scales, camera and weighing crock, I also turned out with an umbrella!. Nathan's second thirty, also caught on Bio-fish wafters, weighed in at 31-04. This dumpy and fat Mirror carp, is probably carrying spawn, which I hope she can successfully reabsorb or shed next year. This Carp was last caught by Lee Hodgkinson at the end of August (see update of 31 August).

Nathan was gutted to lose a very big Common very close to the net. A couple of more feet when attached to his hook, would have resulted in a 35+ club hoody!

Regular Andy Watts normally makes the headlines in my updates, because of the size of the Carp he catches. He set the new Cherry Lake record in July when he had 'Dick' at 44-12 (see my update of 12 July). This time he has earnt a 'mention in despatches', as he landed yesterday a lovely Ghost Common, which had a strong streak of Koi in it, of 19-08. This attractive specimen is one of our home grown younger Carp, which I estimate to be around 6 years old. I am not sure that the photo really captures its lovely colours, as it was exceptional in 'the flesh'. Hopefully she will go on to be one of our target 30's over the next few years.