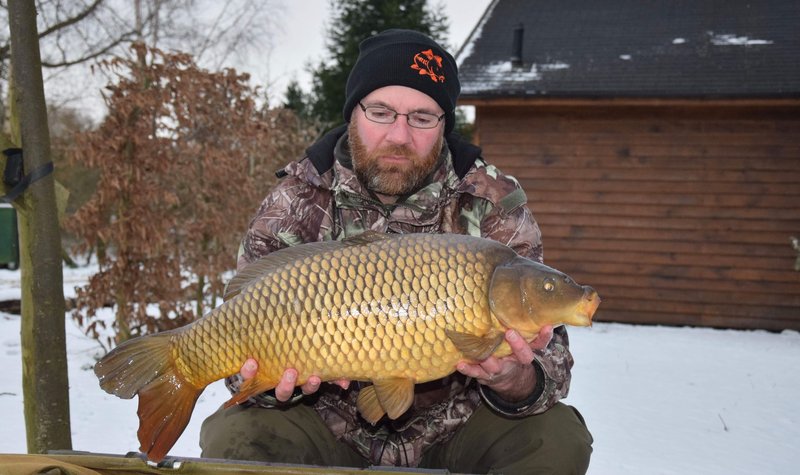 I have got several more ‘Snow carp’ shots to share with you below from last Sunday/Monday, as well as give you my normal update.

The photos of Gary Owen with a 15lb Common from Cherry Springs and Ken Jeffrey with a 16lb Common from Egret Lodge on Cherry Pool are to be treasured. In total 4 different anglers caught double figure plus Carp from the three smaller lakes. A fantastic achievement and real evidence that these are great winter waters.

Ken Jeffrey and Davis Wiles shared 19 Carp last weekend. David’s biggest was a 17lb Common and was caught before the snow arrived. Jon Fisher and his brother Dave followed these guys into Egret Lodge on Monday and have caught a lot of fish (they lost count) with Carp to 16lb and Bream to 5lb. Both Cherry Springs and Cherry Mere produced for their anglers this week including a 21lb+ Common for Tim Barber in Kingfisher Lodge.

Pochard Lodge is still available for next Monday 26th to Friday 30th March following the recent cancellation. A good deal is available if you want to call. First come first served. 01285 869887

The Carp on Cherry Lake are showing increasing signs of movement over the last day or so having recovered from the ‘ice bath’ effect of all the snow on Sunday. Peter Fawson in Grebe Lodge did well to entice three takes but was unlucky to have two of these come off. The 18lb Common which he did land was in excellent condition as the photo shows. Roll on Spring.