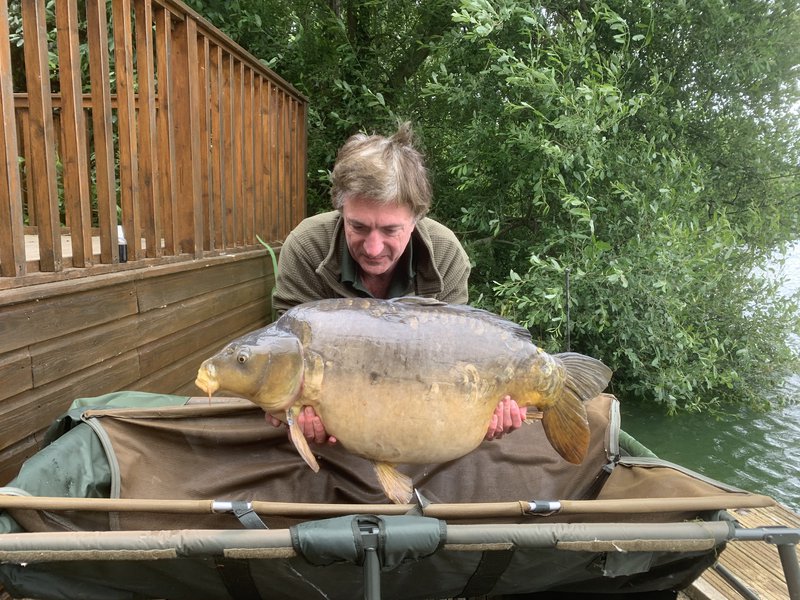 Andy Watts is one of our most 'regular regulars', and he returned on Friday for his latest visit. As always he has returned to his favourite Heron Lodge.

I am pleased to report that Andy is now our new Cherry Lake record holder. Fishing with a tangerine coloured pop-up near to the left hand reed bed, the big Mirror known as'Dick', picked up his bait and after a long fight found its way into his landing net which was held by yours truly. The big Carp looked absolutely massive in the net and I thought that she (yes...... Dick is a female!) would be a lot heavier than the 44-12 which she came in at.....but the scales don't lie!

Andy also becomes only the second angler to have caught a 30lb+, a 35lb+ and a 40lb+ Carp from Cherry Lake to claim the full suite of 30+ Polo Shirt, the 35lb+ Hoody and the 40lb+ Fleece. Paul Mitchell who landed his second 40lb+ Carp last week (a 42lb Mirror called Ruby) being the first angler to do so!

I guess it won't be long before I need to introduce a 45lb+ and even 50lb+ additions to the honorary clothing range! A great 'problem' to have! Any suggestions would be very welcome.

John Travis has been staying in Osprey Lodge on Cherry Lake for the first time this weekend and he has become the latest angler to join the 30+ club when he landed this Mirror at 32lb. Disappointingly from my perspective, John did not call me. he thought I only wanted to see Carp over 35lb!!!. He now understands I like to see as many of the Carp as possible, and particularly the 30lb+ ones caught during the day. Not least so I can help out with the photos.

John who becomes the 172nd member of the 30+ club and smashed his PB, when he landed this 32lb Mirror below. He has caught also two other Carp including a two-tone Common of 24lb and is already promising to return. This Carp was last caught by myself in June at a similar weight and at the time was a new thirty for us. (see my update 'normal service to be resumed' on 23 June). Well done John

I am fairly sure John's Carp is a male fish as the bigger females are largely conspicuous by their absence. My feeling is that the bigger female Carp have not yet spawned and are 'fed up' and largely keeping out of the way (or both anglers and the male fish) whilst they wait for the next warm spell. Hopefully this won't be too much longer!

Adrian and Lorraine Bates are also some of our favourite regulars and have been staying in Pochard Lodge this weekend on Cherry Mere. The fishing has been a little slow but Adrian does not care, because both of the Carp he have caught have been good twenties. These came in at 26-09 (pictured below) and 25-11. With the pressure being high this weekend it is almost like the smaller Carp have switched off giving the bigger Carp the chance to find the bait. Who knows?! Regardless...... well done Adrian.