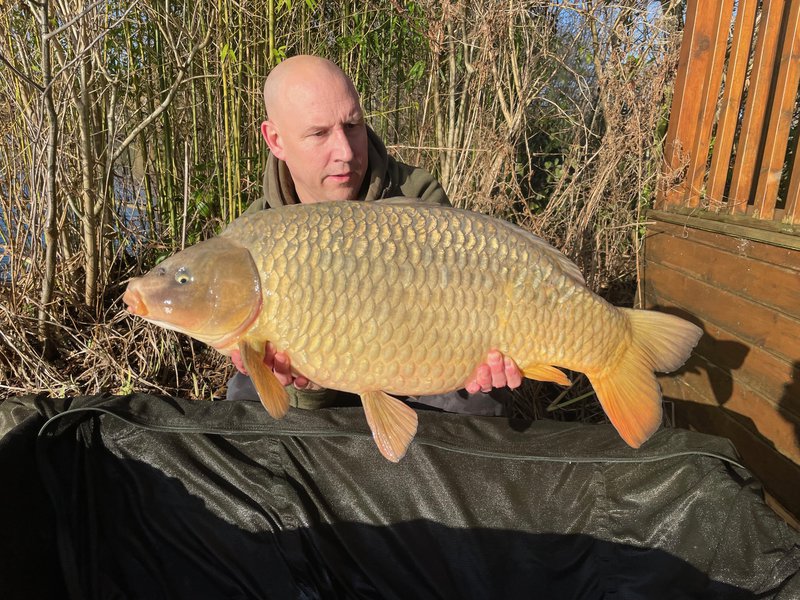 Firstly Happy New Year to you all. I hope 2022 is a year when you will get you rod bent a lot!

The fishing year has certainly started well for Steve Townsend. Steve who has been fishing with sweetcorn and pellets has landed two magnificent Carp this week despite the fall in temperatures and a couple of frosts.

The first Carp, was the stunning Ghost Common pictured above. This is a new 30+ for Cherry Lake, and for us it is an exciting way to get the year off and the first entry in the 2022 catalogue of 30+ Carp. This Carp was caught around 11.30 on Tuesday morning.

At just about the same time the following day, with the overnight frost just about gone, Steve had another bite. Unlike the Ghost Common which gave a slow bite, this one ripped off from the same location (about three quarters the way across in Osprey's water). After a good fight Steve slipped the net under a real brute of a Mirror which looked like it would go 40lb's. On the scales it went 39lb and looked great.

Amazingly, given there were 64 different Carp caught from Cherry Lake in 2021 over 30lb, just like the Ghost Common above, this particular Carp was not caught last year, and indeed it last featured in my catalogue in February 2020 when caught by Charlie England at 38lb+. Interestingly, before this it was previously caught in 2018. It is clearly a Carp which is rarely caught, and seems like it is more prone to be caught in the winter than at other times?

In my experience, particularly in winter, it is often the case that the Carp, only feed for short periods, can be very localised and have a preferred time of the day to feed. This has been the case for Steve this week.

The star of the new year break was Sienna Maclean who stayed in Pochard Lodge with her partner John Webster. They took full advantage of the mild weather to land a total of 12 Carp, including at least 4 over 20lb and a 33-08 Mirror (see picture above). The biggest Carp was a new PB to Sienna. John's biggest was a 27b Mirror. I have included a shot below of a 23lb Mirror Carp caught by John, because I just love the scale patterns and it is a good photo.

Regardless of whether it is mild, cold or wet, I always think that the Lodges status as 'the best bivvies in the world' really come to the fore in the winter. With the on-going pandemic, where better than to spend a few days fishing away from the world in the Cotswold countryside, whilst staying in the warm with a mate or loved one?

Whilst we are booking up fast from March onwards we do still have plenty of vacancies for January and February. So if fancy some winter carp fishing please call 01285 869887