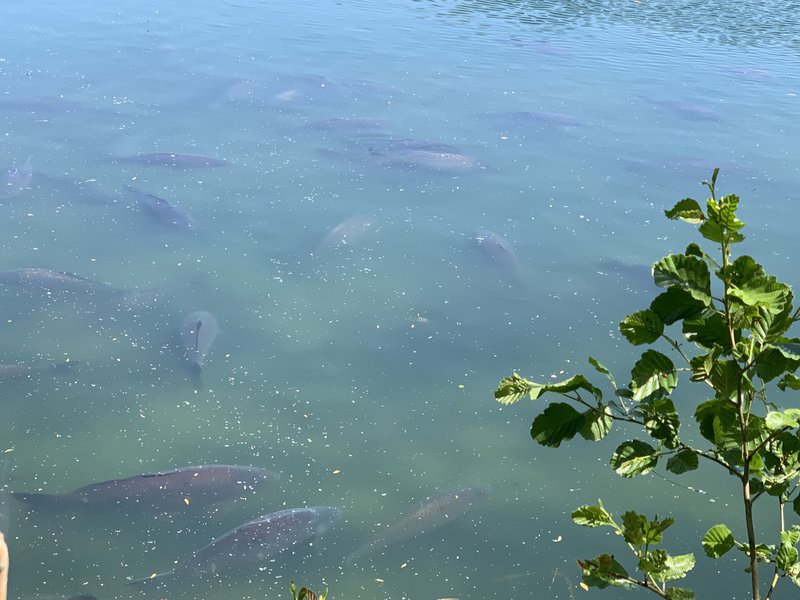 Normal service to be resumed soon!

I sneak a brace of 35's in an afternoon!

The Government has just announced the relaxation of the two meter rule as well as letting hairdressers, hotels and campsites etc to open from July 4th. These changes remove any ambiguity around fishing from Lodges etc and mean we will be operating normally from early July. The key 'exceptions' to this 'normality' being our enhanced cleaning regime; the suspension of the optional bedding and towels service; and discouraging guests from walking around the lakes. I look forwards to producing my regular weekly updates again.

The phone has been 'red-hot' for weeks as people have looked for relatively safe UK holidays to replace their cancelled foreign holidays and fishing trips to France. We could have sold each Lodge 4 or 5 times throughout the summer and autumn. The result is that we are currently sold out until November (except for Egret Lodge for 23-26 October) and taking a record number of bookings for 2021. Indeed, and I am particularly 'talking' to our regular guests here.......if you have a specific date/Lodge/Lake you want in 2021.......then please, to avoid disappointment, do not leave it too long to book.

For the first time ever we have put a message on the website about being full to put people from calling about the next few months. This reflects both the volume of calls and the fact we have nothing else to offer! A lot of folk have also asked to go on the cancellation list. So I have said to be fair to all, that any cancellations will be posted both on this 'Latest News' page as well as on Facebook.

The weather for the last two weeks has been more typical of June (some rain and wind and not too much sun!), meaning that there has been no recent spawning activity. With the weather becoming very hot for the next 3-4 days I am hoping we will get the spawning over with. I think the majority of the Carp in the smaller lakes have already spawned. Any further activity on these lakes will involve a minority of the Carp. This is not the case for Cherry Lake where only some of the smaller Carp have spawned but the bigger Carp have not. Fingers crossed for this week!

I did think with all the lovely weather at the end of May that they would. The big Carp were closely grouped up and looked like they would 'get going' at any time.....but they did not. Other than temperature of the water, I am not clear about why Carp spawn when they do. I guess it does include whether the females eggs are ready (smaller Carp always spawn quicker than bigger Carp suggesting to me that bigger Carp need a bit more preparation time and a longer run at it .........older readers might have some sympathy with this!!!). It must also have something to do with smell or hormones in the water, as once a couple of small groups get going, then others often follow all around the lake. If anyone knows what the 'trigger' is then I would love to hear from you.

The groups of big Carp that I was watching in late May at close quarters were amazing and something I had not witnessed before. Some of the Carp looked huge, but it was the sheer numbers and the proximity of them which really 'floated my boat'! I hope you can see why I was so excited, and frustrated that they did not spawn, by the photos above

Over the last few weeks, particularly in the cooler weather I got my rods out on a couple of occasions. With the diary looking full going forwards, I decided to take advantage of some of the quiet time. I won't bore you with all of these, but just with my exploits a couple of weekends ago. I fished from Osprey Lodge between 06.00 to 15.00 on the Saturday and Sunday. In short I manged four takes, losing one and landing three. On the Saturday I managed a 35lb Mirror followed two hours later at 13.30 by a 35-12 Mirror. My first same day brace of English 30's. I can now wear the 35lb+ club sweatshirt with pride!

On the Sunday having lost a good Carp close in as it tried to duck around the side of the bush, I then landed a 32-04 Mirror. The best thing about this Carp is that it is a new 30lb+ Carp for us and adds to our growing total of known 30's. I hope you like the pictures.