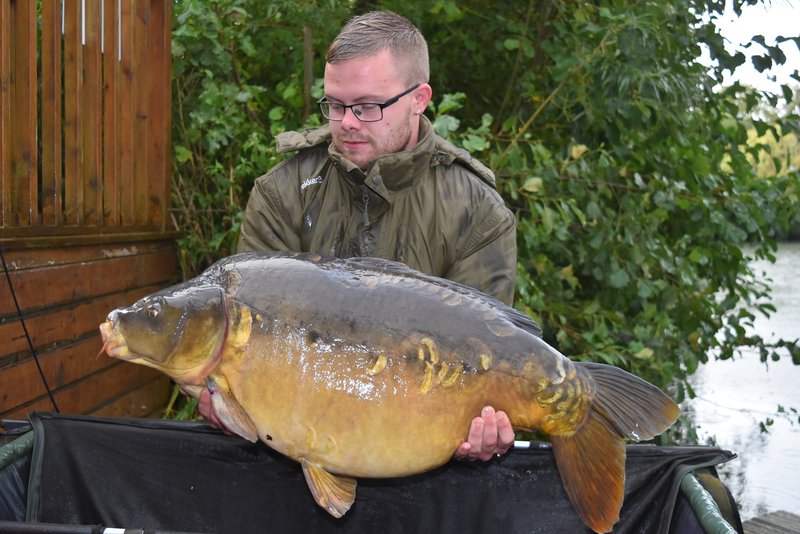 We have two vacancies on Cherry Lake for Monday 14-18 October.

The Cherry Lake Carp have been feeding steadily over the last couple of week's. Text book style for the Autumn. The slowly dropping water temperatures, plenty of rain and wind associated with low pressure represents the ideal Carp fishing weather and conditions. The big Carp have been playing ball, while the smaller Carp have not been getting caught. I am not sure why this, as Carp have been obviously feeding all around the lake (fizzing and bubbling as well as showing themselves).

It is also a little funny how some Carp can disappear for a good stretch and then get caught at least twice relatively quickly. This is the case for two of the Carp featured here 'Dick' and 'Apple Slice'. Maybe it is because some of the bigger Carp are 'more aware' of the coming winter and classically really 'get on the munch', in doing so lose some of their normal caution and are more likely to get hooked? Probably it is just random and they were unlucky!?

I will start with Richard Tweed. Richard has fished all of our lakes across the Cherry Lake complex and just loves it here. In June he 'graduated' to Cherry Lake and blanked. Not to be deterred, he returned to Heron Lodge last weekend and had a couple including his new PB, a Mirror Carp of 29-04. Next time he wants a thirty! Well done Richard.

Jake Snelling has been on his third visit to Cherry Lake this week with his partner Hannah and has been staying in Grebe Lodge. After struggling or a couple of days, I suggested he moved off of 'Essential Cell' and switch to the Cherry Lakes Bio-krill. He is glad he did. Within two hours he landed a 23lb Mirror, followed that night by a 29-03 Mirror. Yesterday he went much better, and qualified for his 40+ fleece when he landed 'Dick' at 43lb. 'Dick' having 'disappeared since October 2018, was caught on 19 September by David Sheppard at 42-04.

This fabulous Carp was weighed by fishery manager Dave at 43-00, is the biggest Carp of the year. She is pictured in the lead photo above. Cherry Lakes Bio-krill being the successful bait. Very well done Jake.

Paul Mitchell is our current lake record holder, having caught 'Dick' last October at 44lb. Paul always seems to do well on Cherry Lake and he is staying in Osprey Lodge for this visit. Normally he fishes with our Fish Supreme red boilies, but this time on Dave's advice switched to the Bio-krill. After just two days he has landed four Carp including a Common of 29-06 and 'Apple Slice' at 34-08. Spookily this Carp was caught by Maureen Sheppard, also at 34-08, just the day before David caught 'Dick' (see my 20 September update). Keep it up Paul.

I am also pleased to report that 'Old Guys rule'! Dave Martin fished in the Cottage swim this weekend with Luke Donnelly (his daughters partner). Well Dave 'thrashed Luke 4-0 in terms of Carp landed. I forget the weights of Dave's other three Carp (I think one was another 29lber), but I did get to see his Common of 32-04 which is pictured below. Well done Dave on a good result on your first visit.....and please give Luke a chance next time!