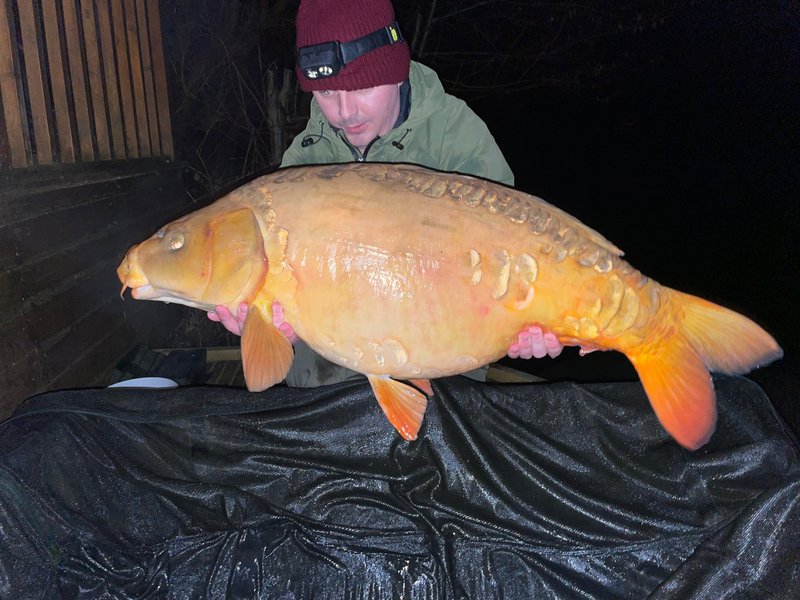 We finish the January/February winter period with 13 different Cherry Lake Carp over 30lb+caught.

We are rapidly approaching the end of the official winter fishing period (December 01 to February 28) and I must say that Cherry Lake is fishing like it is still very much in winter mode.

Before I start talking about Oliver Wells amazing result of the last few days, I feel guilty that I have turned away a lot of past and new guests who have wanted to spend some time on Cherry Springs through the warmer months and I have told them that we are full. Predictably I cannot remember any of their names! Coincidentally two regular guests have had to let me know that they are unable to make it this year. So just in case I disappointed you, we now have Kingfisher Lodge on Cherry Springs available this year for

The Carp are very localised and are feeding in a regular pattern of short bursts for an hour or so in each 24 hour period. Grebe Lodge does seem to be the place to be.

The star of the last few days has been regular Oliver Wells, who took advantage of a quiet diary to pop into Grebe Lodge. And boy he has done well. Whilst the other anglers have largely struggled to even get a bite, with Andy Watts getting the only other Carp being caught, a lovely heavily scaled Mirror of 27lb, Oliver has manged six Carp including three over thirty. He has certainly been in the right place

Oliver has been fishing in Grebe Lodge. Of the six Carp caught all have come between around 19.00 to 22.00, A slight shame from my perspective because it has meant the photos are not as good as daylight ones and make fish recognition harder/impossible for me. His biggest was a Ghost Mirror of 36-12, pictured in the lead photo above, a beauty which Oliver has caught before.

He has also landed on consecutive nights Commons of 34-08 and 32-02. I have included immediately above the shot of the Common, which is not great, but does show an obvious identifying mark. I cannot find this on any other of my known 30's. Can anyone help?

The only Carp to have broken this pattern of feeding in the first few hours after dusk, is this lovely Linear Mirror Carp, pictured immediately above, of 26-04 taken at 11.30 earlier today. I think the bright sun encouraged it to break ranks and have a little 'breakfast munch'.

Oliver has kept things very simple and consistent. His successful tactics was to fish over small amounts of pellets and Hempseed with a few freebie boilies and a matching wafter. Excellent angling Oliver.

With Oliver's sterling contribution, it looks like that we will finish the January and February winter months with (well I think it is) an impressive thirteen different carp over 30lb from Cherry Lake. Winter fishing is always slow and patchy. These results do show that anglers with the right approach and crucially being in the right spot during the right times can do very well.

I wrote in my update on 20 February about Brian Hamilton's capture of 'Crinkle Tail' at 32lb and that whilst I recognised this Common Carp, it did not feature in my 30's catalogue for either 2020 or 2021, and therefore assumed it was a new thirty. Well it was not! I found it in my 2019 catalogue, when it was caught by Paul Salmon in November 19 at a similar weight of 32-02. Another example of how some Carp can effectively disappear!