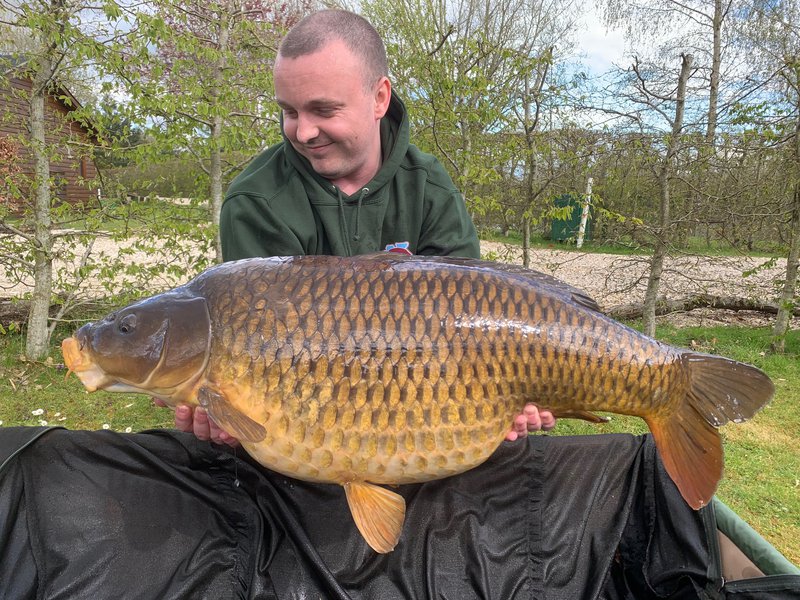 What a week it has been on Cherry Lake despite some normally tough conditions. High pressure, three over-night frosts, bright sunny days and gin clear water. Not normally the conditions where we would expect the big Carp to feed.. Well they certainly have. Perhaps they are also celebrating coming out of lockdown!

Whilst Brian Round continued to catch (see below for details), the real star of the show was Oliver Wells in Heron Lodge. On Thursday afternoon, I think the air pressure dropped, the Carp on Cherry Lake started to pick up the odd baits. the anglers in all three Lodges landed a Carp during an afternoon feeding spell between 14-16.00.

As well as landing a Mirror of 28lb, Oliver smashed his PB when he landed a Common Carp known as 'The Scuff' at 42-02. He is now the proud owner of a 40+ fleece.

Fortunately for us both, I happened to be passing at the time, I had the honour of netting this fabulous Carp. It was obviously a big fish which had given Oliver the real run around during the fight. Indeed it was a struggle to get into the net given it's length. I knew it was a big Carp.....but which one? After carefully getting the net into the retainer in the water, we lifted it into the Carp cradle.

I recognised it immediately as 'The Scuff', which I knew was last out around 38lb, but could not quite remember when. The Carp looked great and very heavy. As you can imagine both Oliver and myself were beside ourselves with joy, when the scales read 42-02. A new PB for Oliver and our fourth Carp in Cherry Lake over 40lb+ in weight. As you can see from the photos the Common was in great condition and 'all there'!

On checking my records, I was surprised to realise that 'The Scuff', which is a very easy to identify Common, did not feature in my 2020 30's+ catalogue. It was last out to John Davies in September 2019 at 38-04. The second big Carp caught this week (see the last Latest News update for Brian Round's 37-14) which did not 'appear' in last years records. We are all very happy indeed!

'The Scuff', is pushing hard for the claim of being the biggest Common in Cherry Lake. She is just behind 'The Patch', which weighed in at 42-12 when caught by Tom Nixon-Taylor last July. The other known 40's being Mirrors including the lake record holder 'Dick' at 49-12 and 'Ruby' at 42lb. There are several other big 30's from last year which might go 40+ next time out. Time will tell!

Brian Round also had an amazing trip. During his stay he landed 6 Carp including four thirties including three above 35lb+. I featured his first three 30's in the last report, notably Mirrors of 37-14, 37-04 and 32-00. His fourth big one of the trip, was 'The Pretty One' at 38-04. A new PB again for Brian. This beautiful Carp would normally be the lead story but has this time unusually been usurped by 'The Scuff.

She was last out last July to Paul Mitchell at 39-12. Ironically I was looking out for her to be our next confirmed 40+, but she is down a little in weight. She was still carrying some of her winter 'slime' so I guess she has only just become active again and will now get on the munch.

Both of the fish above were caught on small pop-ups in water of 4ft or less in depth over a small bed of crushed boilies, pellets and sweetcorn.

Well done again to Brian and Oliver. It is great to be writing this blog again!