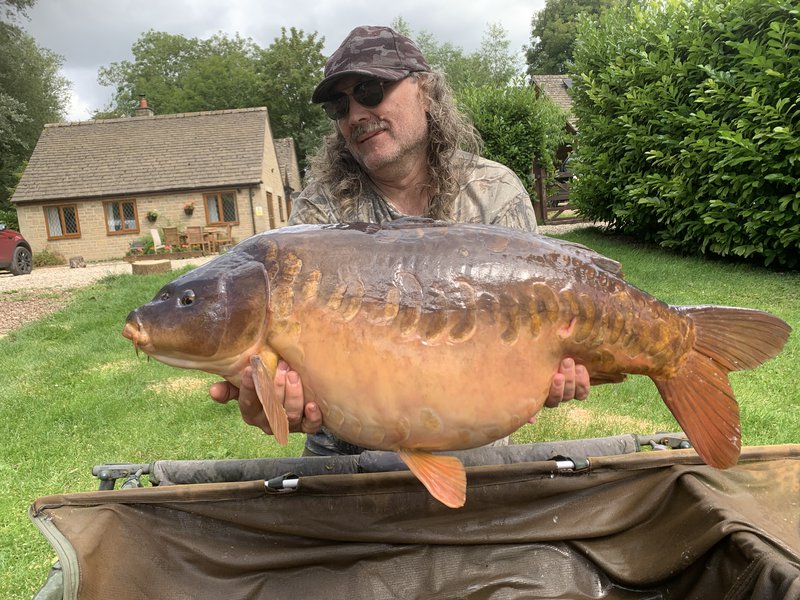 I mentioned in several of my recent updates that we have recently had two anglers 'join' the exclusive club of catching a 30lb+, a 35lb+ and a 40lb+ Carp from Cherry Lake. Andy Watts being the second to qualify early this month followed very recently by Tom Nixon-Taylor. The first person to achieve this feat being Paul Mitchell.

Well Paul has just set another first. He has been fishing in the Cottage swim for the last week and has been by far the top rod on the lake landing 16 Carp during his stay. He has also just become the first angler to catch a 30+, a 35+ and a 40lb+ Carp in one visit! He also missed out on having two 40lb Carp in one trip by just 4oz, which would have been another first!

I did want to write about some other captures this time, but given Paul's amazing results this week, this update is focused on his visit and his much deserved fantastic return.

Paul certainly does it in style having several well known fantastic fish as you can see here. In summary his 6 biggest Carp were

Paul fished a combination of fish meal boilies and pellets. The new Cherry Lake 'Fish Spice' boilies catching the majority of his 16 Carp catch. I have to say we are delighted with how quickly the Carp have got onto this new fishmeal boilie, which has loads of goodies in and is great for them to eat, as it will help their condition and growth.

Paul's very first Carp was 'Ruby' at 42lb as mentioned in my last update. He then followed it up with this 35-04 Mirror pictured above, which I thought was even heavier than the scales said. It certainly has the frame to carry more weight.

On Monday we had some stormy weather at Cherry Lakes including some very strong winds. Whilst sitting in his bivvy, Paul heard an almighty 'crack' just behind him. A little later he worked out what it was........the Oak tree just behind the swim had split down the middle to within about 8 foot of the ground. Amazing that something heavy had not come crashing down. I think this week it has not just been the 'angling gods' smiling down upon Paul!

As a result we had to call in some tree surgeons for some emergency work. I am extremely grateful to Ron Tanner of Opus Tree Care for being so flexible and being able to turn out so quickly. As always they did a great job.

The Oak was clearly a major health and safety risk and sadly had to come down. With the loss of this Oak and also an Ash (with Ash die back disease), the Cottage swim is now very open. I can sense the purchase and planting of several expensive mature trees this winter!

So on Tuesday Paul had to move swim as the Cottage swim was full of tree climbers and falling branches and logs. He moved into the 'very exclusive' decking in front of the house and was very glad he did so. During just three hours fishing he landed an attractive Fully Scaled Mirror of 26-08, followed by 'The Peach' at 33-12. In landing 'The Peach', Paul became the first angler to land a 30+, 35+ and 40+ in one session.....Wow!......and he did not stop there .......

On Wednesday Paul landed two more Carp over 30lb bringing his total for his trip to 5. In the morning he had my favourite Carp, 'The Pretty One' at her heaviest ever weight of 39-12. I would have loved it if she had become our fourth 40lb+ Carp of the year, but it was not to be (this time!). Regardless, what a Carp, as you can see in the lead photo above.

Paul called me again around 2000 on Wednesday evening and I could tell he was almost embarrassed to 'disturb' me again. This time with the 31-04 Mirror pictured below. Well he had no need to feel embarrassed as I always love to see our thirties and it got me out of the washing-up! Even better this Carp is a new thirty for us. I think I was even more pleased than Paul!

Thanks to Paul's outstanding efforts we have now taken the running total to 33 different 30lb+ Carp from Cherry Lake in 2020.