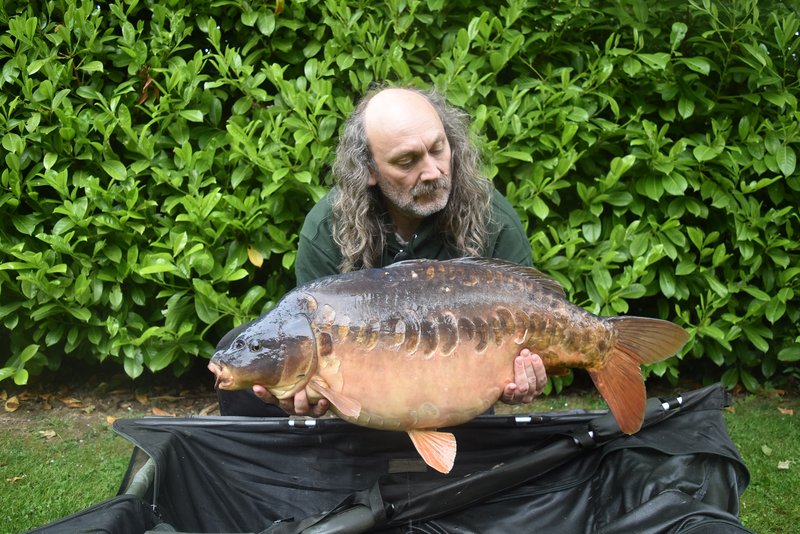 The last week or so has produced some fantastic catches, so to ensure I do everybody some justice I am going to write two updates......one for Cherry Lake and the other featuring Dean Knott's fantastic 48 hours on Cherry Springs. First the Cherry Lakes update.

Over the last ten days on Cherry Lake, up until the early hours of Sunday morning, we have had over 30 Carp landed from all the Lodges/Cottage around Cherry Lake. This is good fishing.....as the fish clearly fed regularly in the lead up to spawning. As you know from my last two updates Paul Mitchell caught a 36lb Mirror from Grebe Lodge (see above) some 9 days ago followed by Teri Brebner setting a new lake record for a lady angler when she landed a 35-08 Mirror last Wednesday (see last update)..

Paul Mitchell moved to the Cottage swim for the second part of his holiday at Cherry Lakes. True to form Paul got amongst the bigger carp with a 28 and a 29lb+ Common (pictured immediately above), plus the week's third Carp above 35lb+. He landed the much sought after 'wood-carving' Carp known as 'The Pretty One' at 37-08 (see lead photo above). Both of Paul's 36lb and 37-08 Carp, as well as the majority of his ten Carp catch, came on the Cherry Lakes fish meal boilies, principally on the 'Fish Supreme', but also on our new 'Bio-Fish' boilie which we have recently started to feed. This looks a good bait and we will continue to feed the Bio-Fish alongside the Fish Supreme throughout the warmer months.Well done Paul. See you later in the year.

John Scoble has been on his first visit to Cherry Lakes this weekend and has caught 6 Carp from Osprey Lodge. His catch included Commons of 31-08 and 29-02. In catching the bigger Common he became the 124th member of the Cherry Lake 30+ club. Plum flavoured boilies doing the trick. He caught Carp from both the far and near margins.Well done John, we look forward to your return.

John's big Common was very interestingly coloured, almost two-tone, as I hope the photo shows. This Carp was caught by Joe Baker in early April and had normal Common Carp colourings as you can see below. I can only think that as this Carp was caught some 6 hours before the Cherry Lake Carp started to spawn that the colours must be spwning/stress related?

As I indicated above, the Cherry Lake Carp started to spawn in the early hours of Sunday morning following a hot humid Saturday. They continued to 'enjoy' themselves until around 12 noon when the rain arrived and dampened everyone's spirits! Some of the recently caught Carp including this week's three 35lb+ Carp have all been carrying several pounds of weight. With spawning started it might be that we have missed our chance to add to our roster of 40lb+ Cherry Lake Carp until the autumn. All might not be lost as it is often the biggest females which are the last to spawn. If so we might still have a couple more weeks to land some of the bigger Carp which have so far avoided capture this year.

It was impressive watching the Carp going through this annual ritual. This year as well as thrashing around amongst the tree roots, they were unusually active along the shallows bar (principally in Grebe Lodge's water). This might be because the water level is unusually low for the time of the year ? I hope it means there will be fewer signs of spawning damage? I doubt that all of the Carp have spawned and will be on high alert the next time we have some hot weather. We will see.