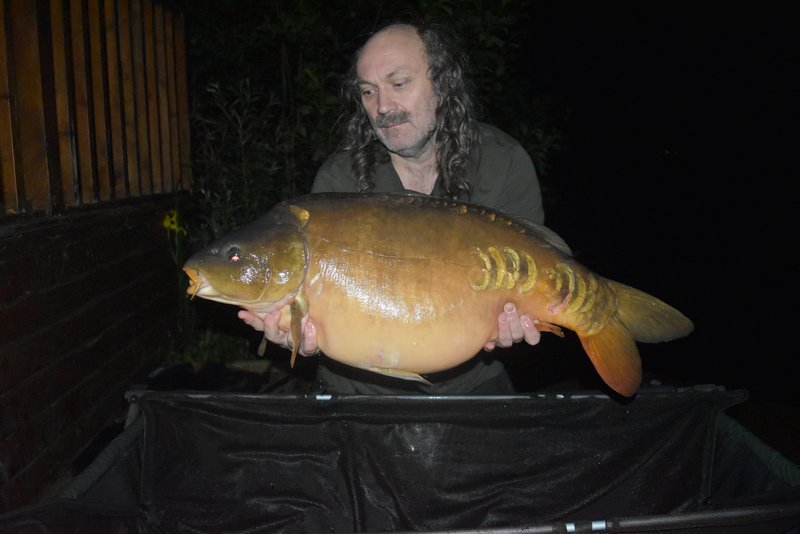 Regular Paul Mitchell spent this holiday weekend in Grebe Lodge on Cherry Lake when he returned with his wife Wendy. On arrival Paul said that he would like to catch a 'big thirty' (wouldn't we all!) so he could complete the 'sweep' of 30+ club polo shirt, the 35+ hoody as well as the 40+ club fleece. Paul 'earnt' his fleece last autumn when he smashed the lake record when he caught 'Dick' at 44lb.

You can tell what is coming.........Fishing with the Cherry Lakes Fish supreme boilies close to the reeds.......I got the 01.00 call to say he had a big thirty in his net and could I come out to photo and weigh the Carp.....which of course I did. I did not recognise this particular Carp at first which took the scales down to just over 36lb. Night photos are never the best and certainly seem more two dimensional than day photos. This Carp was much more of a beast in the flesh, and much more solid than it appears above and below.

This particular Carp is not often caught. The last time I think she was out was last June when Andy Watts had her at 32-04. At that point she also seemed to be carrying some spawn. If so, it suggests she has put on almost 4lb in a year, which is good to see. She is the 13th different Cherry Carp thirty of the year. Well done Paul.

Gary Elwin and Ben Blowers were also on their first visit to Cherry Lakes when they stayed in Osprey Lodge. I am very pleased to report they shared an impressive introductory catch return when they shared a 9 Carp catch. they both beat their PB's with Gary's 28-04 Common below being the biggest. Cherry Lake fish meal boilies accounted for the majority of the action. Well done guys.

The Bairstow family stayed in Pochard Lodge on Cherry Mere and also reported an excellent time.....as well as a few good fish being caught. Fishing the middle area of the lake they caught steadily throughout their stay. The biggest Carp of the weekend fell to Greg Bairstow, an impressive 26-02 Mirror pictured below, which was also his new PB. Mitchell Adams (Grandson) also had some nice fish including this 21-13 Mirror pictured below. We look forward to your return.