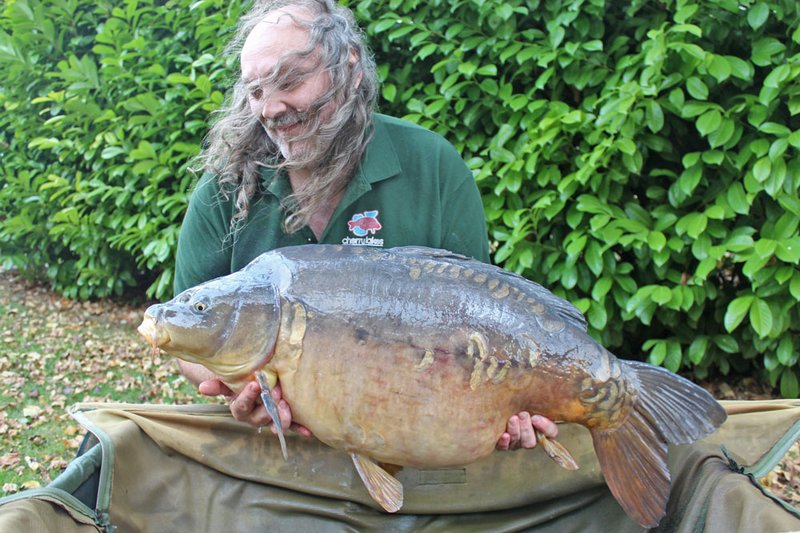 And he christens it 'Dick'.

I know it’s an old football cliche…….but we really are over the moon! Why?…..Read on and you’ll see!

The fishing on Cherry Lake has been slowish for several weeks, with the Carp being caught principally being the bigger ones. Last week the lake was for several days quite dead, but with the warm strong southerly I distinctly remember saying to both Paul Mitchell and Malcolm Stone, before I left for a long weekend away with Judith, that the conditions were perfect and it could only be a matter of time before the increasingly active Carp started to feed.

I will start with Malcolm Stone, who has become the 112th member of the Cherry Lake 30+ club when he caught a 33-08 Mirror Carp from Heron Lodge, pictured below. This Carp was last caught by Terry Lambert in August at 31-08 and has managed to put on 2lb’s in a couple of months. Well done Malcolm. However as Malcolm knows the real story belongs to Paul Mitchell.

Luckily for me, I needed to nip into Cirencester for 30 minutes before hitting the motorways for our trip away. Literally just as we were leaving Cirencester, I got a call from fishery manager Dave asking me how far had we got? Why I asked? Well Paul Mitchell has just landed an absolute ‘pig’ of a Carp and it weighs 44lb! It is hard to do a handbrake turn in an automatic, and as you can imagine we did and we were soon back at Cherry Lake!

In landing this Carp, Paul smashed the Cherry Lake record which was previously held by a Common of 40-04. He also set a new PB for himself. Regular followers of these updates will recollect that I have been saying that the Carp are all up significantly in weight (so far this year 27 different Carp have been caught over 30lbs) and that we suspected that some of the bigger 30′s could well break the 40lb barrier. I did not imagine however that this Carp (which was weighed by Dave Bowen) would break it so convincingly. I am sure you will understand why Judith, Dave and I were on cloud nine with Paul!

This Carp, which has been named ‘Dick’ (see the e mail received from Paul Mitchell below for explanation), was last out in May at 39-02 when she was caught by Malcolm Dix. She was also caught last October at 39lb. Big fish can put on weight relatively quickly as they have the frames to carry it. I do however think that 5lb is a big weight gain and can be put down to the long hot summer and high water temperatures as well as to our on-going feeding programme. If some of our other bigger thirties have gained a similar amount to ‘Dick’ (5lb or 12%+ if you prefer), then we estimate we have at least three other Carp over 40lb+ in Cherry Lake at the current time. It would be great to see one or two of these landed over the winter.

We receive d a lovely e mail from Paul, which with his permission I have largely included below.

What a stay. Your venue only keeps on getting better. As you can understand I am  on cloud nine and this will keep me going till at least our next visit .

The fish, well I still cannot believe it …..44 lbs. Sorry mike I may have got it wrong, autumn is definitely a good time of year now!

The fish showed a few hours before capture  so I put out a CC Moore live system 18mm boilie topped with a piece of fake pink corn, and this certainly did the trick. It was unbelievably the last boilie in the bag after I had crumbed about a dozen into the bait boat, along with your own boilies as crumb and whole and a few handfuls of pellet.

The take was slow and steamed off steadily. The fight was not very long really about 10 mins but I knew It was big when I tried to turn it. When I saw the tail I was speechless and all I could think is how am I going to land it, but I did. When I put it into the sling I knew it was much bigger than my last 30 but did not expect the scales to settle at 44lbs when Dave kindly weighed it for me on your scales. When Dave weighed the mirror I think he did the same as me and had to check the scales.

My only thought was about Dick Walker and his 44lb record which  stood for 28 years , I was bought up reading about this man, I did not realise until checking when I got home that he would have been 100 years old this year.Please name that fish Dick. So apt.

Cherry Lakes in the 2 years I have been coming has to me got better and better and I do not think it will be long before this 44lb record will  be broken, all the fish seem to be growing well and fast. How long before we see a fifty?????

Many thanks for all the efforts you all put in to make this holiday venue a dream, you are all so friendly and it is so private, Cherry Lakes is a credit to you all.” Paul and Wendy.

Thank you Paul for your kind words which are much appreciated. Now whilst I do not normally like naming fish, given this fish is the new lake record holder and the symmetry with Dick Walkers 44lb record and his 100th birthday….then I don’t see how we could say no. So ‘Dick’ it is.

I am not convinced the photos really capture how big this Carp is. Certainly when I first looked down on her in the retainer, her shoulders were as wide a s a Dolphins!  She was truely awesome to see in the flesh and worth the hand-break turn!