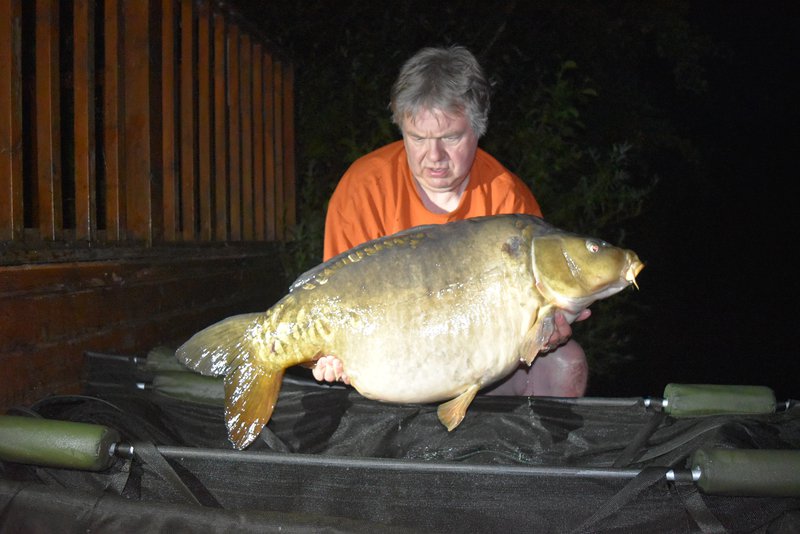 Most of the Cherry Lake Carp have spawned but not all of the big ones.

I appreciate that I have been 'part-time' over recent weeks, as we try to catch up on a number of Covid-cancelled holidays from the last two years. As a result it is even harder than normal for me to keep up with what has been going on. Over the last couple of weeks we have had some 20 Carp over 30lb caught from Cherry Lake. Unfortunately I do not have a complete photo log of these and hence this update will be patchy and inevitably leave out a number of good catches.

Jason Barnes stared in my last update landing 3 Carp in the first 24 hours of his visit with Grandad Bob Smith. This included 'Ruby' at a new highest weight for this Carp of 45-08. Jason went on to land a total of 12 Carp during his week's stay including a total of 7 thirties. Our new Tangerine Squid fish boilie doing thee trick for Jason. Grandad Bob also landed three Carp, also on the Tangerine Squid.

Peter Jones, manager of the famous fishing tackle shop The Tackle Den in Dartford, returned during my absence for his annual visit with his wife Angela. Peter prefers to fish in Grebe Lodge and always does well. He made the point to me this year, that he had to work at catching the Carp as usual, because every year they seem to come from different spots from previous years. The only constant being several periods of one or two days when the Carp seem to move up the lake and he can get a well earnt rest!

I am a little concerned at the frequency which 'Dick' is coming out ( three times in the last two months). Having said that she is in good condition and she went back with her pectoral fins in good shape. She obviously likes boilies! Peter mentioned that he got through over 30Kg of boilies as well as other feed during his two week stay.

Tom Etchell had an amazing recent trip too and I have now got the photos. As well as also landing 'Dick' at 48-08, Tom landed our fifth different 40lb+ Carp of the year from Cherry Lake. This new 40lb+ Common, pictured above, came in at 41-02 and was weighed and photographed by fishery manager Dave. Tom's amazing trip being topped off by another big Common, the two-tone Common pictured below, at 38-08.

Apologies to all the other anglers who caught some great fish during my absence who did not get a mention here. Well done to you as well as the anglers above.

As regular readers know, I am quite obsessive in trying to keep our catalogue of 30lb Carp up to date and can get a little irritated if I miss a good fish when I am here, especially when the photos are poor, or worse the promised photos are not sent to me. I do however have to accept that when I am away, we probably 'miss' more than usual. For example I certainly have not got photos of all of the 20 or so thirties caught over the last couple of weeks.

Having said this, our running total for Cherry Lake in my 2022 catalogue is now 51 different Carp over 30lb, of which 5 are over 40lb+. We are still waiting on seeing the big Common 'The Patch' (last year caught at 46-12) and the other new 40lb+ Mirror from last year. Several other big Carp from last year including 'The Pretty One' are also on the 'missing list'. Hence my guest is that right now we have at least 10 Carp over 40lb+ in Cherry lake.

All the Carp caught reasonably are significantly up in weight. Some of this is down to the 'big-girls' still, or at least appearing to be, carrying spawn. Fishery manager Dave reported that the Cherry Lake carp were spawning on and off for 7 days, principally around the margins in the area of the Cottage swim. Despite getting close whilst watching the Carp spawn, he was not convinced that he caught any of the big Carp in the act! Odd and disappointing if accurate. I was not convinced the bigger Carp spawned last year. Hopefully they will soon!